Artist Jacolby Satterwhite's ambitious new project began by asking this question directly to the residents of the Fairfax neighborhood of Cleveland, the site of a new development by the Cleveland Clinic.

The resulting CGI fantasy film, Dawn, will explore the visions of Clevelanders who contributed drawings and images to the project. Inspired by the solace he found in the fantasy worlds of video games during his own childhood cancer treatment, Satterwhite has expanded a working method he has previously used with his mother’s archive of drawings in order to work with—and learn from—a much larger community.

Installed both as virtual reality arcade at the Cleveland Institute of Art and mounted on a freestanding sculptural screen outside of the BioRepository building at the Cleveland Clinic, Dawn will transform a didactic gallery space into a site of interaction and play, while also bringing a powerful artistic exploration of recovery into a scientific setting. Connecting these two important Cleveland institutions through a dialogue about art and healing, the project will also expand beyond institutional walls using geolocation technology to allow for viewing online and across the city. In its collaborative approach, focus on healing, and multifaceted distribution, Satterwhite’s immersive installation will expand the boundaries of virtual reality applications and instantiate FRONT 2022’s explorations of therapeutic processes.

Local engagement for Dawn has been led by multidisciplinary Cleveland-based artists RA Washington and LaToya Kent. Washington and Kent connected with over one hundred Fairfax residents who contributed drawings to the project. Reflecting on her experience, Kent writes: “I was full in my heart after the time spent in this neighborhood. Looking over the drawings and remembering each face. Connecting to the stories of this predominantly black section of town. I felt survival and love. Trust and beauty. Pride and striving to be seen.” 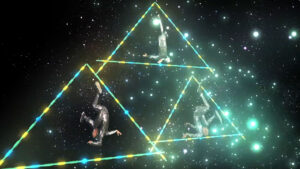