Building on his ongoing investigation into the mythopoetics of wind, Haseeb Ahmed’s site-specific installation Vanquish the Void! (2022) transforms the winds of Lake Erie into a staged weather system in The Lab at SPACES. Ahmed records the winds of Cleveland using a dedicated weather station visible through the gallery window. Inside, these winds are played back in a dramatized form with custom-made automated aeoliphones. Aeoliphones are traditionally crank-driven machines that have been used since the seventeenth century to create gentle breezes and chaotic storms for opera, theater, and cinema. The gallery becomes a place to stage the winds and all their cultural associations. The installation is designed to bring the wind into the hermetic gallery and back out again.

An eight-part score made in collaboration with musicians Heavy Color (Ben Cohen and Sam Woldenberg) duets with these staged winds. The score is a five-channel composition for a small woodwind ensemble performed by multi-instrumentalist Patrick Booth and also incorporates a collection of accounts of the winds of Cleveland by its residents. In a final movement, the score and the aeoliphones’ winds serve as the soundtrack for a film made in real time in the gallery. The film’s visuals are made with practical effects: a model on a suspended turntable rotates through eight different scales of the city which the winds affect. The score and scenes together represent the full cycle of a storm passing through the area, building up from a void to a gentle breeze, then its imminent arrival, cataclysmic climax, and eventual aftermath and repeat. The model itself takes the place of the “eye of the storm” around which a visual vortex forms. Oriented toward downtown, the installation addresses the city as its audience. 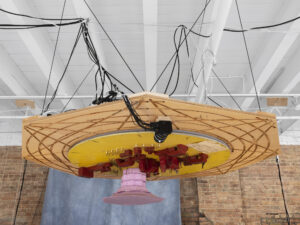 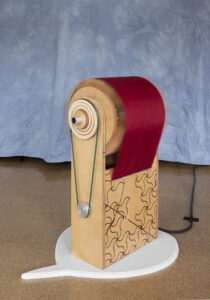 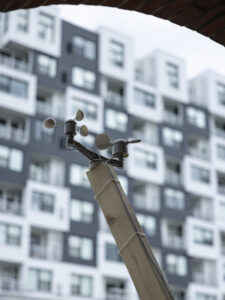 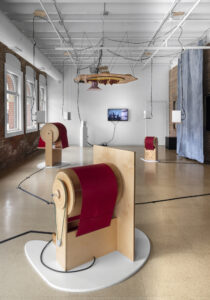