Framed by a scaled replica of the Palmyra Arch of Triumph, the centerpiece of the Syrian Cultural Garden is a fountain. Diana Al-Hadid, who was raised in Ohio and is a Kent State University graduate, has converted the fountain at the center of the Syrian Cultural Garden into a symbolic ancient water-clock whose design is based on several instructions left behind by the twelfth-century Islamic polymath Ismail Al-Jazari. His intricate devices, collected in The Book of Knowledge of Ingenious Mechanical Devices, are considered the first programmable analog computers; they not only told time but also traced astrological measurements. While Al-Hadid’s installation is not similarly functional, it makes use of the fountain’s water feature to support jasmine plants that spill from the basin of the structure.

The national flower of Syria, jasmine, with its wild entanglement of vines and heady flowers, echoes Al-Hadid’s intricate and unruly sculpture. Known for her lacy, gravity-defying work in welded metal, this contemporary take on a historical monument evokes new narratives and speaks to the growth and prosperity of immigrant communities. Al-Hadid’s embedded relationship within a set of intersecting communities—Cleveland’s Syrian-American community and the region’s many artistic communities—allows her the unusual freedom to innovate from within, to reinvent tradition and project forward future legacies that are both challenging and promising at the same time.

Diana Al-Hadid, The Time Being, 2022, Commissioned by FRONT International: Cleveland Triennial for Contemporary Art in partnership with the Syrian Cultural Garden Association. 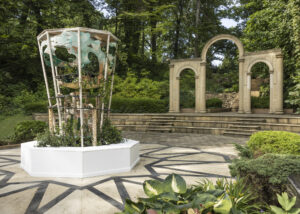 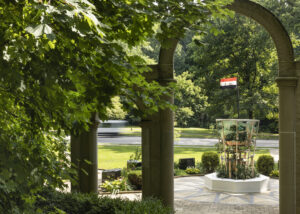 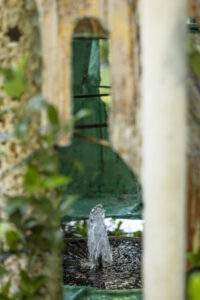 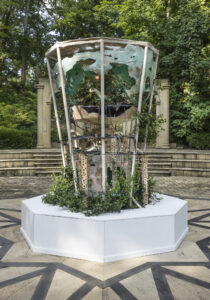 How can the materiality and formal grammar of contemporary sculpture rewrite notions of traditional knowledge in provocative ways?
18 The Syrian Cultural Garden