Inspired by a life-changing encounter with The Limits to Growth, the landmark 1972 study by the Club of Rome that articulated the fatal dangers to humankind of unchecked economic and population growth, the Dutch artist, writer, futurist, and composer Jurriaan Andriessen spent over fifteen years researching, imagining, and illustrating a utopian world he called the Eldorian Empire. Eventually published in 1986 under the title Eldorica, Andriessen’s vision was based on research into statistics, architecture, and technological systems that reject the expansionist and accumulative logic of capitalism, and his never-before-exhibited prints and drawings provide a glimpse into this fantastical world. Inspired by architect and philosopher Buckminister
Fuller, Andriessen imagines a richly detailed universe, ranging from the urban scale of the city to intimate domestic interiors, filled with sustainable user-driven machines and appliances.

In Toby’s Vault, what appears from afar to be a portrait of a young woman is revealed up close to be a dense musical score of fifty-four distinct compositions by Andriessen. Begun in 1977 and developed over five years, the unique form of the score itself necessitated experimentation with line thickness and density.

The equivalent of almost one-and-a-half hours of performed music, the compositions also vary from top to bottom, from pieces that reference existing styles and composers to the emergence of a wholly individual musical imagination, one intended to serve as the soundtrack for the Eldorian Empire. 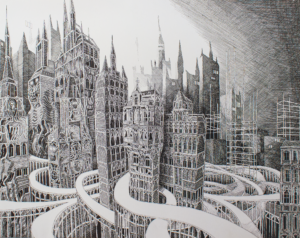 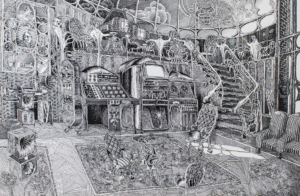