Last Night, presented during FRONT’s opening and closing weekends, is a film showing thirteen-and-a-half hours of records as they are played on a vintage
Thorens turntable. Despite its strict shot sequence and cool effect, the film evokes resonances of joy through the music being played. It represents one part of Beck’s extended project, Last Night, which consists of multiple, interconnected artworks that all revolve around a singular, ephemeral event: the last party that David Mancuso threw at the Loft’s 99 Prince Street location on June 2, 1984. Through painstaking
research based on an archival recording, Beck identified and sequenced the 118 songs played at that final party. Elements of Beck’s project are exhibited in FRONT 2022 at Bop Stop and at Transformer Station. In addition, since 2020, Beck has created a new series of MP3 mixtapes for the triennial as communications over distance that can be downloaded from FRONT’s website. (see below!)

In the words of the artist, Last Night is a poetic construction, as much a private experience as it is memory of something that actually happened: a construction that speaks of history and love, of pleasure and time.” The project points to the ways in which the essential human form of music can bring different people together into new communities. It also plays a role within the genesis of the show. Well before the curatorial process of Oh, Gods of Dust and Rainbows began, Beck invited the
show’s original co–artistic directors, Prem Krishnamurthy and Tina Kukielski, to a dance party in Brooklyn organized along similar audiophiliac principles as the original Loft parties. This shared experience of community and movement became a reference point in developing the exhibition’s thematic approach.

This project was produced in collaboration with Phileas with additional support from the Federal Ministry for Arts, Culture, Civil Service and Sports, Republic of Austria 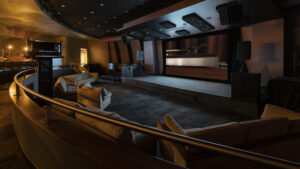 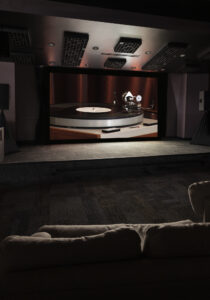 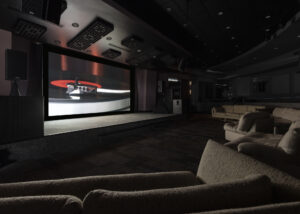 How can a reconstruction of the past evoke community and joy?
3 BOP STOP
How can an exhibition reveal the relationships that led to its making?
1 FRONT PNC Exhibition Hub at Transformer Station