Used rubber tires, which inundate landfills around the world, are Chakaia Booker’s primary medium. Her use of this material dates back to the early 1980s, when she first moved to New York’s then–economically distressed East Village and where she has lived since. Searching for a material to make her own, the artist began experimenting with the countless tires she encountered walking around her disheveled neighborhood.

Booker transforms the detritus of the automobile age into objects of both beauty and horror. She slices and shreds the tires into strips and shards that she then carefully bends, folds, weaves, and assembles into a myriad of novel and idiosyncratic forms. These range from the representational to the abstract and can vary in scale from the totem-like Muse (2007) to mural-size wall works, immersive installations, and public sculptures. When abstract, Booker’s sculptures often feel monstrous and grotesque, creaturely and otherworldly, their shapes generative and fecund, as if in a state of constant becoming. Sometimes their tendril-like protrusions suggest African American hair.

Booker’s commitment to and creativity with rubber is boundless. Her considerable skill in this wholly unprecedented medium has been acquired through a principled commitment to craft, to learning by doing and making. The inclusion of Booker’s sculpture in this show acknowledges Akron’s history as a hub of tire manufacturing, which has earned it the colorful moniker of Rubber City. She transmutes this legacy of industrial boom and decline, of labor and craft, into a tangible material statement.

Alongside her sculptures at Quaker Square is an extensive survey of her work with the Robert Blackman Printmaking Workshop in New York City, the oldest and longest-running community print shop in the country. Spanning Chine collé, monoprints, litho- graphs, and woodblocks, the dialogue between her two- and three-dimensional works provides a unique perspective on her process. 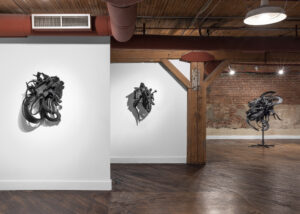 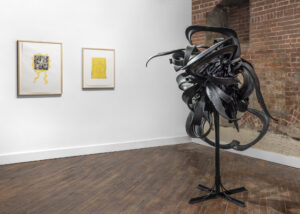 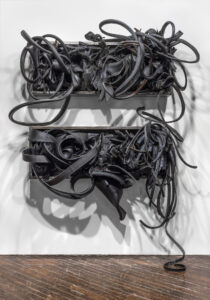 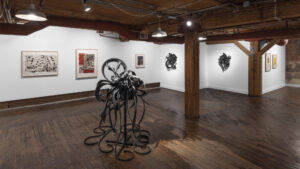 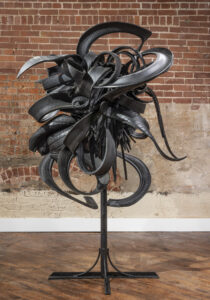 How can artists repurpose materials, memories, and spaces into something new?
24 Curated Storefront, Quaker Square at the University of Akron
How can an expanded notion of craft let us understand healing more creatively?
25 Akron Art Museum