Jukebox and The Feve are bars in Cleveland and Oberlin, respectively, that represent a kind of “third place”—significant spaces apart from work or home where different communities intersect. The conversations within such watering holes can also provide fertile ground for often-invisible artistic dialogue and the more celebrated work that emerges from it.

During FRONT 2022, these two bars house episodes of Paradise by Calla Henkel and Max Pitegoff. Named after the fictional bar that serves as the setting for their ongoing TV series, Paradise is a series of silent 16 mm films, narrated via subtitles, that follows several characters employed as bartenders by an ominously absent boss. Filmed at Henkel and Pitegoff’s own bar, TV Bar, and set in a near-Berlin, Paradise creates an uneasy parallel reality. The performers in Paradise, aside from actors, are mainly bar regulars, employees, and neighbors. Within the films, which begin innocuously, the bartenders are tasked with shifting each evening’s dialogue through texts read to customers via teleprompter, fulfilling the boss’s vision of turning the bar into a human-centered local news station. Over the course of the show, the employees attempt to take control of their own narrative. The unsettling relationship between text and image—which appears straight-forward at the beginning yet develops unexpectedly humorous, poetic, and political resonances—suggests that context creates new ways to understand something.

Paradise will remain a work in progress so long as TV Bar is open. It is presented only on monitors installed in bars, cafés, and artist-run social or community spaces, marking out an existing network of economic and social realities to serve as a backdrop for its fictions. In this, the artwork exists outside of the opening hours of typical art institutions and galleries, instead embracing the specific rhythms of the bars and cafés that host it, as well as borrowing the background noise of these locations as a soundtrack. Mirroring the interest in language, community, meaning, and upheaval throughout Oh, Gods of Dust and Rainbows, the films help connect the triennial with the spaces where art and life blend together. 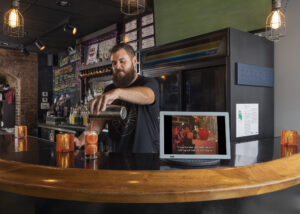 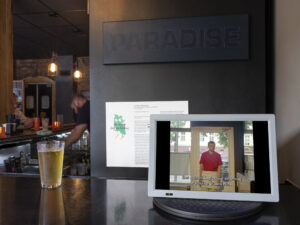 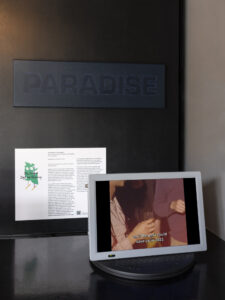