Allana Clarke’s practice critiques the rituals and ideals of Black femininity she has encountered throughout her life by magically transforming into art the cosmetic products commonly used by African American women. Clarke’s best-known wall works are crafted out of hair bonding glue, a liquid latex commonly used to attach hair extensions to the scalp. She begins by pouring out a thin layer of the substance on her studio floor. While a “skin” forms quickly, underneath, the bonding glue remains malleable for many days, allowing Clarke to gradually pinch and twist it into shape.

The final product is a record of the process of its own making. It is also a document of catharsis, of the artist grappling not just with a novel medium but also with the cultural associations it holds. Seductive and monstrous, these sculptures evoke a multitude of associations. Their amorphous shapes and rippled surfaces suggest territories and topographies, wrinkled skin or cured hide, while their glossy and tacky blackness recalls oil spills, invoking the threat of ecological disaster. Commissioned by and produced for FRONT 2022, this is one of Clarke’s largest works to date in this medium, and the first to move off the wall and extend onto the floor.

Clarke’s practice also involves working with text. Blacklack, composed of letters cast out of unrefined cocoa butter, is a one-word concrete poem. Mirrored around the B in black, the repetition of lack reminds us of racist associations of Blackness as inadequate, as less than human, while its inversion, which renders the word illegible, challenges this dehumanizing logic.

Allana Clarke, At a Depth Beyond Anyone, 2022, Commissioned by Akron Art Museum and FRONT International: Cleveland Triennial for Contemporary Art. 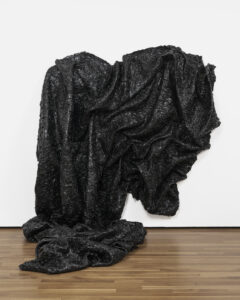 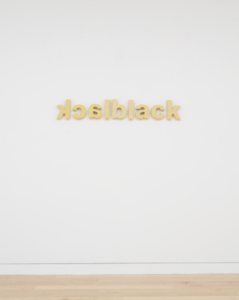 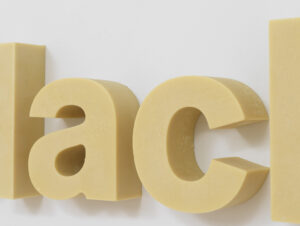 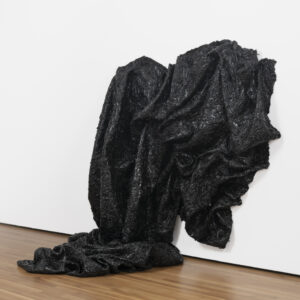 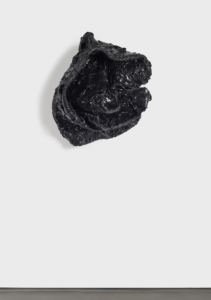 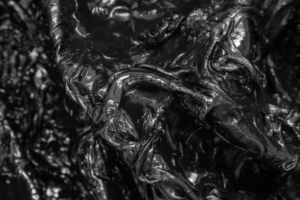