founded by Daniel Fernández Pascual
and Alon Schwabe in London, 2013

Lake Erie is suffering from hypoxia—lack of oxygen—created by agrochemical-laden runoff from fertilizers, suffocating many of its underwater species and threatening the health of the entire local ecosystem.

For Oh, Gods of Dust and Rainbows, London-based collective Cooking Sections has initiated a long-term project that looks at Ohio’s environmental futures through the current metabolic condition of Lake Erie and its surroundings. This takes the form of a site-specific installation in Lake Erie in conjunction with a multi-year social initiative. The overall project highlights some of the small-scale local farmers’ commitment to regenerate the soil, eliminate the use of chemical fertilizer, and, through this, improve the quality of the Lake Erie watershed.

The installation consists of a fountain on the lake that celebrates the efforts of an initial cohort of Ohio farmers that are removing chemical fertilizer from their farming methods. Oftentimes those who are named and commemorated in the public sphere have made their wealth through extractive practices. In contrast, this project highlights figures and practices contributing to the local ecosystem’s health. The fountain, named after the participating farms, acts as a catalyst to address hypoxia in the lake’s water, both literally and symbolically: it both aerates the lake’s water to increase its oxygen levels and draws public visibility to the issue. This is coupled with a three-year process in partnership with SPACES, an artist-initiated nonprofit, to support the farmers’ ongoing efforts by setting up a support network to reduce regional dependency on chemical fertilizers.

Cooking Sections’s contribution is one of several FRONT 2022 projects that combine visible manifestations within the exhibition with longer-term infrastructure initiatives. Invested deeply in complex social and food-based ecosystems, Cooking Sections offer a model for how artists can work in and on the planet in a collaborative, emergent manner.

Cooking Sections, To Those Who Nourish, 2022, Commissioned by FRONT International: Cleveland Triennial for Contemporary Art with support from The Andy Warhol Foundation for the Visual Arts and in partnership with North Coast Harbor, Downtown Cleveland Alliance, Great Lakes Science Center, and the US Army Corps of Engineers. 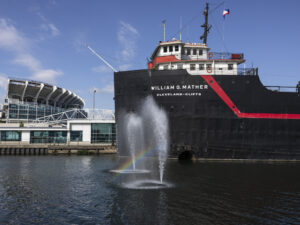 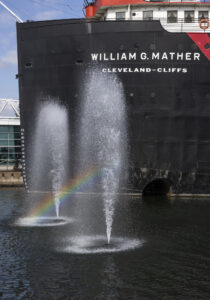 Are we getting enough air?
6 North Coast Harbor
How can we rewild the ways we understand and imagine natural phenomena?
2 SPACES