For FRONT 2022, Akron-born Alexandria Couch presents a series of vividly colored new paintings on canvas and paper, using found materials like recycled thread and patterned fabric to create intimate depictions of fragmented bodies that explore the often dissonant relationship of Blackness to its environment.

Couch conjures her figures into existence: “The Black people in my work do not exist outside of the imagination. They are strictly familiar composed of multiple references, broken down and pieced together to reconstruct being.” Executed in a sketchy, intentionally unfinished style, they remain mutable, their liminality perhaps most noticeable at their extremities: hands and feet appear to have extra digits or are repeated, as if fluttering in motion; serpentine braids sprouting from heads appear to probe the space around them like antennae. “Shapeshifting becomes the routine,” she writes. “To strip down constantly and rebuild becomes easier than wearing the same clothes. Change is comfortable. Change is necessary to live between worlds.”

Drawing its title and subject from Billie Holiday’s famous 1939 anti-lynching protest song “Strange Fruit,” Couch’s Waiting for the Sun to Rot (2019) shows a man stripped down to his underwear hanging from bound feet, his black skin set off by a brushy ochre background filled with sketches, doodles, and notes. However, the specter of racial violence is more often intimated than shown. Individual figures, often young Black women, appear in moments of repose: on a picnic blanket in a park in Everyone Wants a Front Row Seat (2021) or curled up in bed in Precious Moments: The Levee Is Overwhelmed by Water (2022). Possibly referencing Hurricane Katrina, the latter’s disquieting title disrupts the restful pose. Similarly, in other works, couples are wrapped in such tight embraces that their bodies fuse together, their union a protective response to a pervasive but invisible threat. These Black figures embody both power and vulnerability. As she puts it, they reveal “how we inhabit a world not built for us.”

Firelands Association for the Visual Arts

At Firelands Association for the Visual Arts in Oberlin, Alexandria Couch presents a series of new paintings using found materials like recycled thread, fabric, and paper scraps to create intimate depictions of fragmented bodies that explore the relationship of Blackness to its environment. 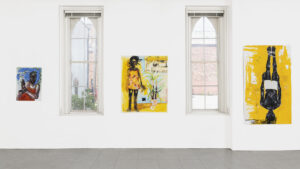 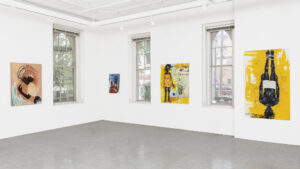 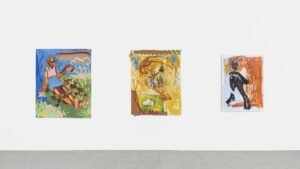 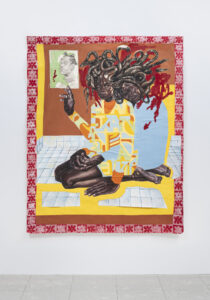 Is a body an archive? Can an archive be embodied?
27 Firelands Association for the Visual Arts (FAVA)