A graduate of the Cleveland Institute of Art, Dexter Davis’s raucous collage-based works are made by layering and combining fragments of hand-carved woodblock prints together with scraps of found paper and other materials. Recycling everything around him into something new, Davis transmutes the ordinary into something evocative, forcing us to reconsider the limits and possibilities of our material world. For Davis, a survivor of multiple episodes of urban violence, the daily practice of art making offers a space of freedom, liberation, and refuge. Finding himself in a difficult personal place in the early 1990s, he embraced generative, creative rituals. “I started getting involved with this ritual thing. I really had nothing to work with, I had to find things, so I started finding common things that I had around me. It became a ritual. It was kind of the same thing we do every morning when we go to work. We get up in the morning, we do these various tasks ... I made a ritual out of that situation.”

The trio of works on display at the Akron Art Museum was made in the years following this tough period. Davis began working as a guard at the Cleveland Museum of Art in 1994, which provided a degree of much needed stability, financial and otherwise; he
still works there today. Inspired by his mother, who was an avid gardener and managed to feed her family with the harvest during fallow times, the series blends Davis’s gestural expressionism and the faces and masks that reappear across his oeuvre—a nod to African aesthetic traditions—with references to plants, flowers, and seeds. Buoyed by such optimistic imagery of rebirth and regeneration, both natural and spiritual, these works capture Davis’s irrepressible resilience and suggest the integral role that art making has played in that process. 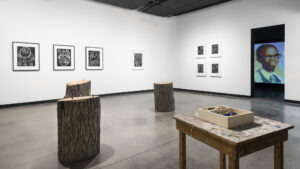 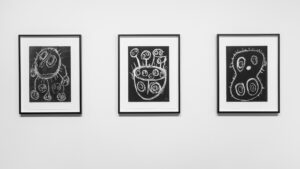 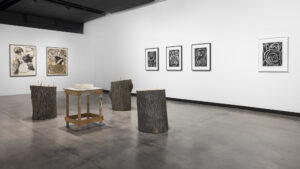 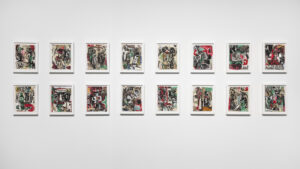 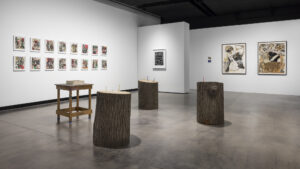 How can an exhibition reveal the relationships that led to its making?
1 FRONT PNC Exhibition Hub at Transformer Station
How can the moving image capture the way that conversations transform over time?
10 Cleveland Institute of Art
How can an expanded notion of craft let us understand healing more creatively?
25 Akron Art Museum