The polymathic artist, poet, and play-wright Langston Hughes moved to Cleveland in his childhood and maintained a significant artistic connection to the region. His 1957 poem “Two Somewhat Different Epigrams” inspires the title of FRONT 2022. Composed of two rhyming couplets with contrasting sentiments, the poem captures the entanglement of beauty and pain, tragedy and transcendence intrinsic to earthly existence:

Oh, God of dust and rainbows,

That without dust the rainbow

I look with awe upon the

And God, Who sometimes spits

right in its face.

As fellow poet Gwendolyn Brooks wrote of Hughes, “NO one possessed a more serious understanding of life’s immensities.”

At Cleveland Public Library, a selection of reproductions of archival material relating to Hughes’s life and work assembled by the library’s team offers insights into his methods. The three facsimiles and one large-scale blowup presented at Transformer Station demonstrate Hughes’s process of writing and rewriting. Although seemingly simple, the poem evolved through multiple stations from an earlier invocation—“Prayer”—into its later published form. Such revisions, carried out with nothing more than a typewriter and a pencil, transform the poem’s emphasis in successive steps.

The painstaking labor of art making is often invisible in the final work. Part of the curatorial ethos of FRONT 2022 is to make this process accessible to others as a tool for learning. 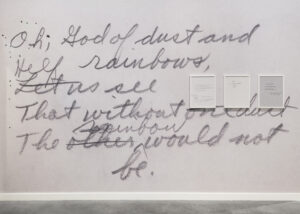 How can visual, aural, and verbal languages be abstracted and read anew?
7 Cleveland Public Library, Main Library
How can an exhibition reveal the relationships that led to its making?
1 FRONT PNC Exhibition Hub at Transformer Station