With the work One Million Years, On Kawara opposes human awareness of the day, which conditions most of his other work, with an almost unimaginable measure of past and future time.

In 1993, Kawara expanded One Million Years to encompass live and recorded readings that allow the project to be both preserved and perpetuated through public recitation. Since then, One Million Years has been the subject of numerous live readings and recordings around the world. All readings follow a standard format, developed by the artist, with readers appearing in pairs to recite alternating dates in sequence. Each new session begins where the previous one ended—counting slowly from the past to the present, or from the present into the future—and they will continue until the contents of all ten volumes of both works have been read aloud.

Kawara was born in Japan in 1932 and lived through the historical tragedy of the atomic bombs that the United States dropped on Hiroshima and Nagasaki during World War II. Much of the artist’s early, figurative work before he left Japan is in a surrealist, grotesque mode that can be seen to reflect these wartime horrors. Although Kawara was famously taciturn about the meaning of his work, he did leave clues: for example, by naming a run of ninety-seven date paintings produced over three months in 1970 Everyday Meditation. Both listening to and reading One Million Years is a powerfully grounding experience—FRONT’s artistic director Prem Krishnamurthy listened to the recordings of the piece on a daily basis during 2018, in the year before the work of FRONT 2022 began. Offering an even more explicitly meditative experience—both for readers and listeners—One Million Years can be seen as an ongoing practice of healing on a human and even planetary scale. 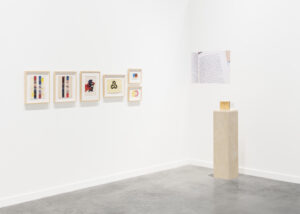