Christopher Kulendran Thomas’s metabolistic new works are paintings of .png files that were generated by machine-learning algorithms trained on the work of other artists. Created by initially training a neural network on large parts of the Western art-historical canon, this network is then fed with the work of Kulendran Thomas’s Sri Lankan peers and many of their Western influences. The images produced by this artificial intelligence are entirely new compositions in the styles of those artists. By painting these images onto canvas, members of Kulendran Thomas’s studio bring another layer of human interpretation to the process.

Exploring creativity, authenticity, and originality as humanist fictions, these paintings emerge from the memetic circulation of art-historical imagery along the contours by which power is negotiated globally. They are systematically influenced by many of Sri Lanka’s most successful artists, who have risen to regional prominence following the brutal end of the Sri Lankan Civil War in 2009. That war wiped out the Tamil homeland of Eelam in the north and east of the island, from which Kulendran Thomas’s family hails. With the island’s subsequent economic liberalization following that violence, the first white cube commercial galleries opened in Colombo, representing a generation of artists influenced virtually by the Western canon.

Although the works appear at first glance as singular, static objects, they represent a physical manifestation of the artist’s larger social ambition to use technology to question reigning power systems. In the artist’s words: “Around the world, the juridical framework of human rights has been leveraged not only to protect the oppressed and disenfranchised but also to justify the imperial ambitions of the nation states by which human rights are enforced. Perhaps though, the problem is not with the concept of human rights but with the very category of human itself.” 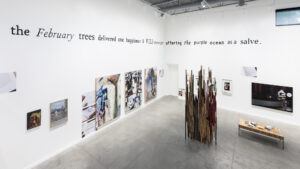 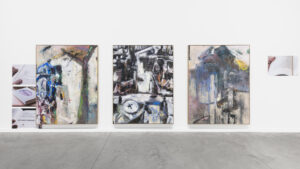