Daniel Lind-Ramos is the quintessential artistic bricoleur, using everyday objects and materials scavenged and collected in and around his hometown of Loíza, Puerto Rico, to construct large-scale sculptural assemblages that reference his Afro-Carribbean heritage and its syncretic spiritual and cultural traditions. Hovering between the representational and the abstract, between the artifact and the ritual tool, Lind-Ramos’s sculptures can feel both archaic and futuristic, both sacred and alien. In Maria-Maria (2019), his response to the widespread devastation caused by the titular hurricane in 2017, Lind-Ramos used the blue FEMA tarpaulin, which provided makeshift shelter and is a poignant reminder of the inadequate recovery effort, as Mary’s characteristic shroud, ensconcing the coconut that stands in for her head. Composed out of the detritus of an everyday life made increasingly precarious by climate change, the sculpture was a way to both mourn and surpass disaster.

With a tripartite structure that recalls both a Christian altarpiece and Pablo Picasso’s Three Musicians(1921), Con-junto (The Ensemble) (2015) highlights the centrality of music and performance in the spiritual and material life of the Caribbean. Incorporating a trumpet and cymbals alongside objects of domestic labor such as casserole dishes, pails and brooms, various parts of the ubiquitous palm, and deflated basketballs, the sculpture’s title cleverly references both its subject and its mode of construction, a “bringing together” of disparate parts into a cohesive whole. Exemplifying an ingenuity of adaptive reuse often borne of scarcity, Lind-Ramos’s practice transforms this ethos of survival into a type of skilled craft. 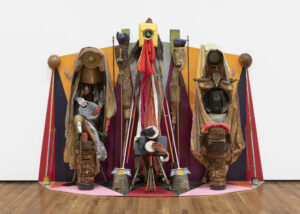 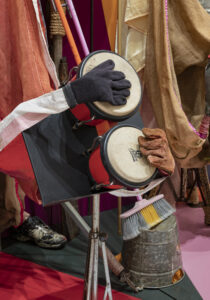