Jumana Manna’s presentation at SPACES reflects her growing interest in the environment and ecology of her native Palestine and its surrounding regions. Punctuated by meditative close- ups of gently swaying crop fields, her feature-length film Wild Relatives (2018) investigates the complicated politics around and multiple stakeholders involved in the preservation and repatriation of indigenous flora destroyed during the Syrian civil war. It follows the movement of a batch of seeds withdrawn from the Global Seed Vault in Svalbard— a repository established to protect plant species from extinction due to disease, war, or climate catastrophe—and destined for Syria via Lebanon, where the regional seed bank moved following the destruction of Aleppo. In addition to the various international nongovernmental entities involved in such preservation efforts, Manna’s film also investigates and reveals the effects of such initiatives on and the labor of those whose lives and livelihoods are actually tied to the land and its cultivation.

Complementing the film is a set of colorful collages that evokes canonical representations of nature, referencing art historical genres such landscape and still life: an epic biblical landscape, a floral arrangement, a sunny beach scene, and a nocturnal view of the corniche. They are constructed out of fragments of labels appearing on common chemical household cleaners, products that often feature pastoral imagery, relying on our associations of “freshness” with nature to bolster their promise of cleanliness. By emphasizing their synthetic and sickly saccharine palette, Manna’s collages reveal these idyllic fantasies to be the dystopic visions they actually are, a devious ruse used to obscure the significant dangers the use of these products pose to our environment. 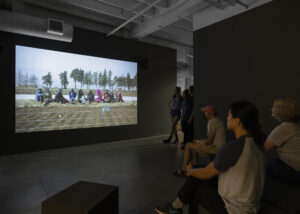 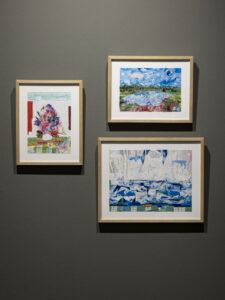