One of the most celebrated contemporary Japanese artists, Yoshitomo Nara makes work across mediums that draws on a range of sources, including music, literature, and childhood memories. Over nearly four decades Nara has developed a signature style that integrates features of Asian and Western culture, reflecting the artist’s movements around the globe.

This pair of recent works highlights two essential directions within Nara’s art practice. Painted portraits of solitary children hovering in empty space have been a recurring subject for him. While the children’s wide eyes suggest a youthful innocence, their demeanors brim with psychological complexity, alternately emitting loneliness, anger, and menace.

Nara embarked on ceramics later in his career, during a 2007 artist residency outside of Kyoto in the town of Shigaraki, the site of an ancient kiln in Japan. Inspired by this historic setting and his fellow residents, many of whom were accomplished artisans, Nara found his way to a new medium. In particular, his gourd-shaped vessels integrate his interests in three-dimensional form, painted imagery, and language into a single object.

Nara’s work in ceramics is further motivated by clay’s identity as a natural resource. This is revealed in the artist’s recollection that, following the 2011 Great East Japan Earthquake and Tsunami and his ensuing doubt of art’s purpose, it was “wrestling a large piece of earth” with his hands that brought him back to his vocation.

The Cleveland Museum of Art 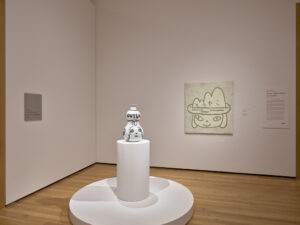 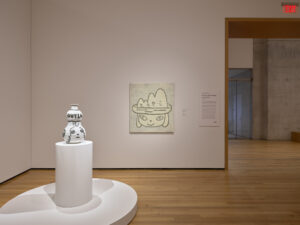 How can we bring the body back into the systems and spaces of art museums?
20 The Cleveland Museum of Art