SM-2N: sldrty? is an interactive, architectural-scale sculpture that invites exhibition visitors to collaboratively reconfigure Transformer Station’s Crane Gallery. By pushing two hollow beams that turn with little effort—visitors activate an exposed system of relays to raise, lower, and slide overhead projectors as well as hanging panels that partially obscure their throw. The video features words by novelist Gabriel García Márquez used by curator Bonaventure Soh Bejeng Ndikung in an essay on how to practice universal solidarity. It plays in an asynchronous loop on opposing walls of the gallery.

This complex environment of interwoven motion, which generates and redacts meaning over time and transforms space through the body’s actions, is the work of Sarah Oppenheimer and Tony Cokes. Introduced by FRONT during the Covid-19 pandemic and collaborating here for the first time, the two artists have conceived a presentation that is variously hybrid: part human, part mechanical; part digital, part analog; part Oppenheimer, part Cokes. The work escapes easy definition through the entanglement of sculptural and filmic modes.

The artists’ unusual process involved lengthy discussion and coordination over several years. What has resulted represents a noticeable departure from each artist’s most widely known work. In Oppenheimer’s case, SM-2N: sldrty? is one of the first times that the artist’s work—which has played with the parameters of exhibition design and the gallery space for decades—also functions as the display for other, more narrative artistic material. Furthermore, the piece possesses a surprising rawness: the infrastructure of the “instruments” are left unclad, allowing the mechanisms that animate the work to be visible. In Cokes’s video contribution, the text is fragmentary, poetic, and dispersed across two walls, which challenges the linear progression more typical of his art—other examples of which can be seen during FRONT 2022 at the Rock & Roll Hall of Fame, Karamu House, FAVA Gallery, and the Akron Art Museum.

With clean simplicity, Oppenheimer and Cokes’s multi-part environment transgresses basic assumptions around the static nature of exhibitions and the singular authorship of artworks. It simultaneously highlights the visitor’s essential role in creating meaning within a gallery context.

Sarah Oppenheimer and Tony Cokes, SM-2N: sldrty?, 2022, Commissioned by FRONT International: Cleveland Triennial for Contemporary Art in partnership with VIA Art Fund and The Andy Warhol Foundation for the Visual Arts. 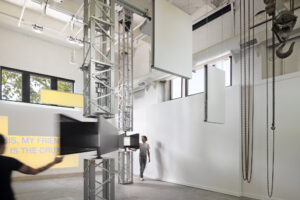 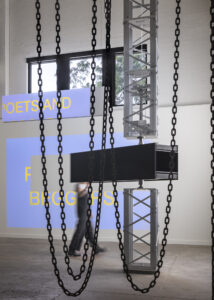 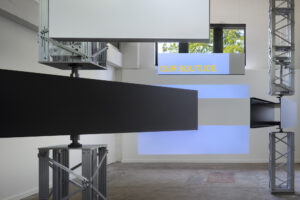 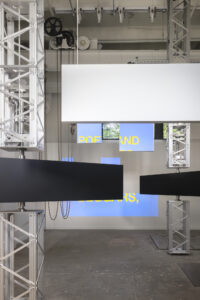 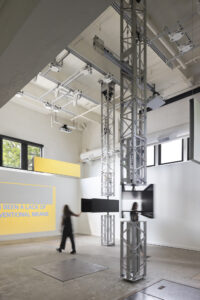 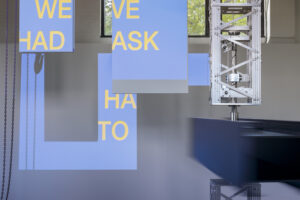 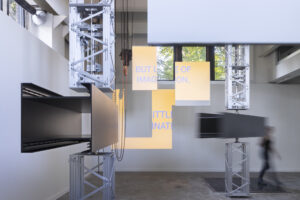