Hailing from a suburb of Detroit, Dominic Palarchio’s work often engages with the automotive industry. A wall hanging collaged together from stained rags, the red used by mechanics and the white by house cleaners, acknowledges the labor of maintenance through the traces it leaves behind. Suturing together the automotive and the domestic, the masculine and the feminine, Palarchio posits such labor as a type of craft, a daily practice, frequently overlooked but essential for society to function.

Presided over by Peanut, a political party icon carved out of petroleum coke (commonly referred to as petcoke), Palarchio’s constellation of assisted readymades addresses issues related to environmental classism and racism. A byproduct of the oil-refining process and a cheap alternative to coal, petcoke is a known environmental hazard. Palarchio uses it as a metonym for industrial pollution, juxtaposing it with household fixtures like filters and alarms, seemingly innocuous objects for most but which become critical survival tools for those living in areas with poor air and water quality. A carbon monoxide alarm is affixed to a filter from a humidifier, an appliance whose use has risen along with the incidence of asthma and other breathing ailments. A pair of egg shells sit delicately on top of a catalytic convertor—a car part used to reduce the toxicity of exhaust fumes and prized by thieves—a reminder of the distinctive smell that a malfunctioning one emits. A Brita water filter balances precariously above a splayed-open section of oxidized copper pipe, a reminder that the local water supply can easily and unsuspectingly become polluted by industrial runoffs, as was the case most recently in Flint, Michigan.

Palarchio’s art practice provides entry points into the life-worlds of the American worker whose laboring body is simultaneous exploited and made to bear the effects of what scholar Rob Nixon has termed the “slow violence” of industrialization. 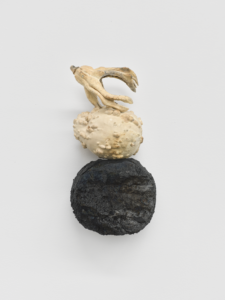 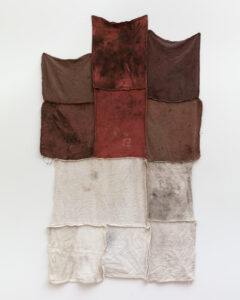