Robert Reed was the first African-American tenured faculty at Yale’s School of Art, where he taught basic drawing and painting for over four decades. Mentored by Bauhaus legend Josef Albers, Reed earned both a BFA and MFA there before returning to teach in 1969. A cornerstone of Reed’s demanding pedagogical approach, repetition was also central to his own practice. The bulk of his oeuvre consists of just six series; selections from two are part of FRONT 2022.

Exhibited in Reed’s 1973 solo exhibition at the Whitney Museum of American Art, the monumental Plum Nellie Split, November Reason #2 (1972) elegantly synthesizes the gestural energy of Abstract Expressionism, the strong geometries of hard-edge abstraction, and the stain-like application of color field painting. Reed’s use of negative space is notable; the crisp edges and sharp corners of unpainted rectangles contrast strongly with translucent circular swipes of paint. From two decades later, the Tree for Mine (1991) series consists of unruly amalgamations of shards, zigzags, and curves of cut paper held in place with metal fasteners.

Though they might appear abstract, Reed’s artworks are sublimations of the prejudice and racism he experienced growing up in the segregated American South. He referred to them as “pictorial stews”: shapes, lines, paths, and networks blended together with covert references to landscapes, landmarks, and institutions of personal significance, encoded through his choice of color and whimsical titles. “Plum nellie” describes the deep purple that Reed used across that series but also references Southern slang for “almost” or “damn near,” pithily encapsulating their intentionally unfinished and provisional look. “Wash and Park” and “Venable Dump” refer to a park and an elementary school near Reed’s childhood home in Charlottesville. Given this subtext, and Reed’s deep investment in the symbolic potential of color, the almost monochromatic palette of these works may not be a simple case of black and white. 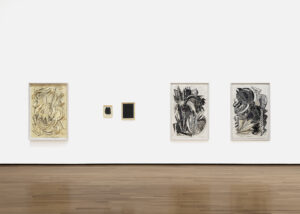