Glitter, rhinestones, and silk flowers are among the signature elements that adorn the glamorous yet exceptionally profound collages and sculptures by artist Devan Shimoyama. By incorporating readily available materials found at dollar stores or arts-and-crafts establishments, Shimoyama subtly scoffs at the art-world’s longtime refusal of decorative art and casually nods to the history of faux luxury and decadence in both drag and African American culture. In the process, Shimoyama creates both conceptual and representational works that relate his experience of living as a Black queer man in today’s political environment.

The 2012 murder of seventeen-year-old Trayvon Martin inspired Shimoyama to create a series of hoodie sculptures like February that serve as an homage to the countless Black men that have suffered from police brutality and racially motivated violence. Bedazzled and decorated with elements that vibrate off the garment’s surface, Shimoyama’s conversion of the hoodie into an ornamental work of art combats its associations with stereotypical Black masculinity and, considering Martin was wearing a hoodie at the time of his death, celebrates and memorializes it as an icon of Black pride. Similarly, in Summer Shimoyama embellishes a swing in reference to the 2014 killing of twelve-year-old Tamir Rice at a playground in Cleveland. The poetic silk flowers and jewels lay on the seat, heightening it from innocence to the heavenly. Importantly, Shimoyama’s inclusion of silk flowers in both February and Summer is reminiscent of fleeting memorials found on urban streets that indicate the site of a person’s death. Like those memorials for the fallen, his works translate the pain and trauma of death, but also share an overwhelming sense of rebirth. 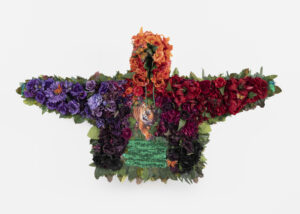 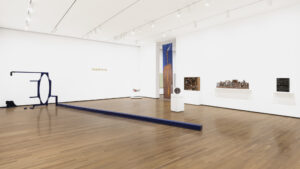