Oberlin-based Audra Skuodas was a prolific, almost compulsive, artist, producing thousands of paintings, works on paper, embroideries, books, and objects. For her, art was a daily practice, a spiritual and philosophical endeavor through which to make sense of the cosmos and her place in it, and to overcome various childhood traumas.

Skuodas’s early naturalism gradually gave way to more stylized imagery: her settings splintered into Cubist planes and geometric shapes while her figures flattened and elongated, their skins lightening to a ghostly translucency. She also introduced overt references to her religious upbringing, from Christlike figures and crosses to crowns of thorns and stigmata. These were gradually distilled down to a multi-valent but universal abstract form: a narrow, pointed oval, more often red than not, that synthesized Christian iconography with Lucio Fontana’s iconoclastic slash and the central core imagery of early feminist art, a motif she referred to as a “wound” and repeated in much of her subsequent work. In the Womb Wound series it appears alongside and interwoven with solitary contorted bodies, sorrowful figures that appear both tortured and in a transcendent state of grace. In later works on paper, the “wound” dissolves into fields of small circles, as if the traumas it held could finally dissipate into the universe.

The paintings from Skuodas’s final decade forgo the figure entirely, drawing inspiration from mathematics and physics to create all-over fields of “wounds,” dots, shapes, and straight and wavy lines that pulsate with cosmic energy. The grid reappears in these works not as a rigid structure but as a mutable matrix that can be made to undulate and vibrate. With these late works, Skuodas achieved an abstract idiom that remained true to her abiding concerns, unabashedly spiritual and bodily, at once humanist and cosmic. 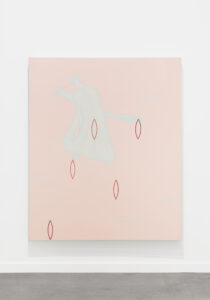 ★ Audra Skuodas Studio
How can an exhibition reveal the relationships that led to its making?
1 FRONT PNC Exhibition Hub at Transformer Station
How can an expanded notion of craft let us understand healing more creatively?
25 Akron Art Museum