Charmaine Spencer employs materials like clay, driftwood, grass, burlap, and soil to create skillfully crafted sculptures constructed from traditional and contemporary methods, such as weaving, firing, and collage. Her concern for natural elements that go unnoticed drives her interest in organic resources. Dirt, for example, is intrinsic to life yet in the West it is often undervalued. “Healthy dirt is what feeds us,” the artist argues, “it’s what makes everything happen.”

A throughline that connects Spencer’s sculptures and installations is her interest in African ancestral history and the application of craft to create tools for healing. Both Fire and Water, for instance, are fashioned after African spirit vessels. Initiated during moments of ritual or ceremony, such vessels are called upon for a multitude of concerns that include safeguarding communities and healing the sick. Yet both Fire and Water are set apart by their distinct materials, too, like the repurposed nails that pierce Fire’s skin, and by their correlation to the nails often found in Kongo minkisi, or “power figures.”

In 2021 Spencer participated in Still We Rise, an exhibition organized by Robin Robinson for The Sculpture Center that featured Black artists whose work responds to the overlooked stories of Cleveland’s historically Black east side. Spencer chose to focus on Woodland Cemetery, where Sarah Lucy Bagby, the last fugitive slave returned to slavery under the Fugitive Slave Act of 1850, is buried. Inspired by Bagby’s story and in retrospect of the past two years and the triumphs and hardships of her Black ancestors, Spencer created Air. The work was a collaborative effort in that it’s composed from shredded paper that once carried community responses to Spencer’s prompts that inquired what we would ask our ancestors. When rung, the bells perform as spirit vessels, summoning ancestral spirits to guide, heal, and protect from the past and from that which is to come. 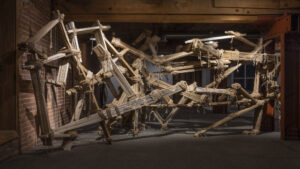 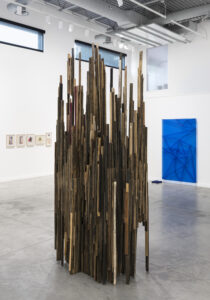 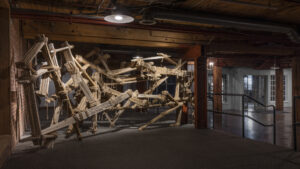 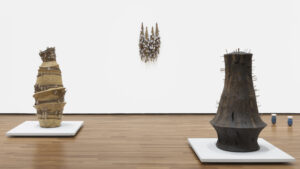 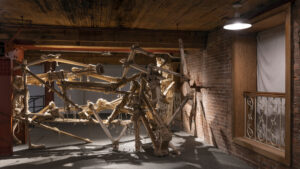 How can an exhibition reveal the relationships that led to its making?
1 FRONT PNC Exhibition Hub at Transformer Station
How can artists repurpose materials, memories, and spaces into something new?
24 Curated Storefront, Quaker Square at the University of Akron
How can an expanded notion of craft let us understand healing more creatively?
25 Akron Art Museum