A longtime resident of Hudson, Ohio, La Wilson celebrated the detritus of everyday life through her work. Wilson obsessively collected cheap castoffs she would find in local garage sales, flea markets, antique shops, and five-and-dime stores or that were given to her by friends and neighbors. Accumulated through this daily practice of scavenging, Wilson would then magically transform these humble materials—beads, pencils, dominoes, crayons, piano parts, toys, and fragments of dolls, to list just a few—into enchanting assemblages that were rarely planned in advance. Instead, working with what she had at hand, Wilson would let her materials guide her toward a final composition, form realized through process.

For Waddy Reynolds (1965), a never-before-exhibited early work by Wilson, is a frieze of fragments of found wood and other objects arranged on a shelf, mimicking a display of family photographs and heirlooms on a mantel. The titular dedication and empty frames give the work a haunting memorial-like quality. In Burn Out (1980), a wooden cabinet is stuffed to the brim with matches, arranged so their white heads often point out, creating a stippled allover effect that undermines the container’s gridded structure. Though three dimensional, the composition recalls Jackson Pollock’s skeins of paint, who inspired a contemporaneous work by Wilson, Homage to Jackson Pollock I (1980).

For Retrospective (2004–06), her largest and most complex assemblage, Wilson carefully organized objects into each compartment of a ten-by-ten wooden grid, creating a patchwork of patterns, each with a palette and rhythm of its own. Like poet Charles Baudelaire’s fabled “ragpicker,” Wilson manages to reclaim a sense of order, beauty, and value from the dizzying deluge of commodities and refuse that characterizes consumer capitalism. 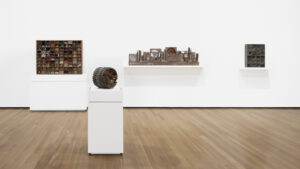 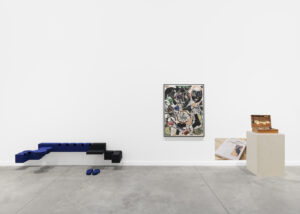 How can an exhibition reveal the relationships that led to its making?
1 FRONT PNC Exhibition Hub at Transformer Station
How can an expanded notion of craft let us understand healing more creatively?
25 Akron Art Museum