FRONT International will participate in the eighth edition of the Expo Chicago art fair, which runs from September 19 through 22, and will feature some 135 galleries from 24 countries at the Navy Pier Festival Hall. Click here for the full list of exhibitors.

Stemming from a key mural painted in 1973 by Julian Stanczak, “Carter Manor,” near the corner of Prospect Avenue and 9th Street in Cleveland, Stanczak’s urgent Op Art design graced the twelve-story brick facade for years before its removal. In 2018, FRONT revived the original painting as a legacy project, connecting early public art efforts to new currents.

FRONT will showcase the newly created portfolio, expertly screen-printed at BRT Printshop in Brooklyn, NY, and Zygote Press, Cleveland. The portfolios come enclosed in a hardbound portfolio case, produced locally in Cleveland. This edition is a limited edition of twenty. 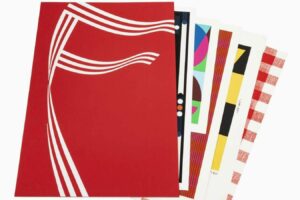