One Big Bag (2021) is a 40 minute single channel video that uses a “mobile corpse kit”—a bag filled with everyday objects that death doulas have to care for the newly dead—as both the visual structure and narrative driver of the video. With a matter of fact demeanor and intense physicality the performer guides the viewer into the largely uncharted waters of corpse care — practical, political and spiritual. The form of the video creates a tension between the subject matter of dying and the forceful liveness of the performance itself.

Every Ocean Hughes, a.k.a. Emily Roysdon (born 1977), is a transdisciplinary artist and writer. Every’s recent projects take the form of performance, photographic installations, print making, text, video, and curating. EOH was editor and co-founder of the queer feminist journal and artist collective, LTTR. Her many collaborations include music with The Knife, Colin Self, and JD Samson & MEN; costume design for choreographers Levi Gonzalez, Vanessa Anspaugh, Faye Driscoll, and the band Le Tigre. 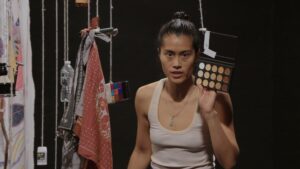