Making its North American debut at the Cleveland Museum of Art, Maria Hassabi’s CANCELLED, a
performative work for four female performers, moves within a soundscape that emphasizes an
endless lifespan. The choreography utilizes Hassabi’s signature style of stillness and deceleration, and
displays representational female poses based on mannerisms throughout history. The use of
verticality and frontality create a form of resistance both as a metaphor and as a reality, reflecting on
ideas that are directly related to the work’s title. CANCELLED being meticulously crafted, evokes and
questions the subtle interchanges of power between subjects.
Since the early 2000s Hassabi has developed a unique artistic practice based on the relationship
between the live body, the still image, and the sculptural object. Hassabi’s works reflect on concepts
of time and the human figure, while employing a variety of media to emphasize the complexity of
formal organization. In most of Hassabi’s works the performing body is the main subject, often
embedded within imposing installations. In the context of the CMA’s Ames Family Atrium, CANCELLED
invites visitors to pause and take note of their own relationship to time, space, and the images that
infiltrate their daily experience.
Hassabi’s methods for slowing down perception mirror FRONT International 2022’s curatorial
attention to the long time frames that meaningful change—whether on a personal or social level—
often requires. –EL

The duration of the performance is approximately 60min.

CANCELLED was produced by the LUMA Foundation and premiered at LUMA ARLES as a result of the
Artist-in-Residency Program. It was co-commissioned by and received additional support from FRONT
International: Cleveland Triennial for Contemporary Art, in partnership with VIA Art Fund. 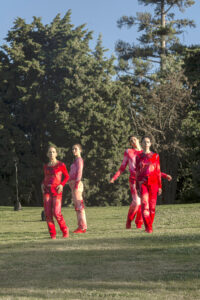