CLEVELAND, Ohio — In a letter to his son in 1892, the great French Impressionist Camille Pissarro noted the miraculous nature of art as a way to create beauty with the most commonplace of tools, including pencil and paper.

“One can do such lovely things with so little,’’ he said.

The organizers of the second version of the FRONT International: Cleveland Triennial for Contemporary Art may not have had Pissarro in mind when they planned their upcoming show, scheduled to open July 16 at venues across Northeast Ohio.

But a preview exhibition now on view at the nonprofit Transformer Station gallery through Sunday, Jan. 2, makes it clear that they’re very much on Pissarro’s wavelength.

“The idea is to juxtapose big ambitions with the kind of daily practice and the quotidian part of art-making,’’ Prem Krishnamurthy, the artistic director for FRONT 2022, said in a recent interview at Transformer Station, describing his approach to the upcoming triennial, and the preview.

“You might not have the biggest tools, but you have ambitions and you have intentions and you try to come close to them,” said Krishnamurthy, a Berlin-based curator, designer, writer, and teacher.

Entitled, “Grand Prototypes, Humble Tools,’’ the preview exhibition, on view through Sunday, Jan. 2, is a quirky, entertaining and at times provocative experience that offers an intriguing look at what should be on tap next summer.

The show focuses on works by more than a dozen local, regional and national artists working in film, textiles, video, collage, assemblage, and other media. It encompasses topics as wrenching as the death of a child, and as joyful as dancing in the streets.

At one extreme, an animated video installation by Providence-based artist Tony Cokes uses quotes from Black writers Tina Campt and Saidiya Hartman that tries to explain what motivated whites to participate in Black Lives Matter protests in the summer of 2020 after the police killing of George Floyd.

The thrust of the piece is that some [White People] may have concluded that a failure to engage in protest marches would have constituted a form of complicity in anti-Black racism. To score its searing points, the work uses minimalist means: simple words and phrases that float on glowing fields of blue or red.

At the show’s other extreme, it’s possible to indulge, guilt-free, in the colorful textile creations of Toledo-based artist Loraine Lynn, which resemble shaggy fragments of carpeting in psychedelic colors and patterns. Lynn’s fluffy creations sprawl across two gallery walls and spill onto the floor, inviting visitors to lounge amid their soft, inviting splendor.

More than anything, the Transformer Station exhibition emphasizes that next summer’s FRONT will be more introspective in mood and more focused on psychological issues than the first one.

Launched in 2018 by philanthropist and collector Fred Bidwell, the FRONT triennial was conceived as a recurring, summerlong, multi-venue exhibition powerful enough to flex Cleveland’s cultural muscles and to make Northeast Ohio a must-visit destination in the art world, at least once every three years. (The second edition was delayed to 2022 because of the coronavirus pandemic.)

The first version of the show displayed works by 115 artists from across the globe at more than two dozen exhibit spaces and public places around the region. It drew 227,000 visitors, including 31,000 from outside Ohio, and generated an economic impact estimated at $31.2 million, not to mention extensive media coverage.

Directed by Chicago-based Conceptual artist Michelle Grabner, the 2018 triennial focused on the theme of “An American City.’’ It dealt with poverty and racism here and elsewhere, but also highlighted the roles cities play as gateways for immigrants, crossroads of finance, and epicenters of culture and innovation.

This time around, the new FRONT and its artists will embrace “art as an agent of transformation, a mode of healing, and a therapeutic process,’’ as Bidwell put it during a public presentation at Karamu House in January 2020, just weeks before the coronavirus pandemic hit.

“The show will address difficulties, wounds, things that require healing,” he went on to say that night. “There’s a speculative sense of hope and optimism that change is possible.”

The FRONT team had no way of knowing then that the world would soon go on lockdown, and that they’d have to postpone the second their show by a year.

But the theme of healing now looks almost eerily prescient. It makes sense especially at a time when people are in need of solace and comfort amid a lingering global pandemic that has assaulted daily life, adding to social and political divisions tearing at society.

For starters, the preview show tries to bridge a cultural divide by dismantling the idea of art as a rarefied activity undertaken by geniuses elevated far above their audience.

For example, the exhibition shows how the 20th-century poet Langston Hughes, who spent part of his life in Cleveland, crafted a poem by revising drafts with a typewriter and a pencil. Beyond that, it was just a matter of blood, sweat, and rewriting.

The show goes on to demonstrate how Cleveland artist Dexter Davis, who also works as a security guard at the Cleveland Museum of Art, makes entrancing abstract collages by recycling scraps of wallpaper and other bits of useless material that acquire magical qualities through his daily ritual of creative work.

Small assemblage sculptures by the late Hudson-based artist La Wilson show how she accomplished similar feats by accumulating and assembling small collections of commonplace objects and installing them in boxlike structures that possess an aura of mystery and wonder.

The show stresses that art can be made from just about anything. And it invites visitors to think about how they could transform their life and jumpstart their own creative practice.

Viewers are asked to respond to prompts based on works on view in the show by scribbling notes or making sketches on brightly colored pieces of paper, and pinning them to bulletin boards. Informal seating areas are scattered with inspirational books about art-making, self-help strategies, and bridging racial divides.

The atmosphere is more like a workshop or a studio than a formal “do-not-touch’' gallery or museum.

But there’s more than feel-good art on view.

A somber work by Cleveland-area sculptor Paul O’Keeffe is part of a series responding to the death of his teenage son, an aspiring poet who took his own life, according to a label accompanying the artwork.

Resembling an elaborate bench comprised of geometric forms extending from a wall, it’s made of steel painted in tones of deep blue and black that seem to suck the light out of the room. A pair of three-dimensional boot prints on the floor add the suggestion of a human presence, or rather, absence.

Along the same wall, the exhibit tacks away from grief to the possibility of joy in a video produced by Dansbana! an all-female Swedish architectural collaborative devoted to designing and installing public dance floors.

The video, also called “Dansbana!” records a 2018 installation in Stockholm that inspired passersby to indulge in everything from break dancing and moonwalking to folk dancing and pretzel-twisting stretching exercises.

For next summer’s FRONT, Dansbana! will install a public dance floor in Akron, following a community-focused design process taking place this fall.

At the opposite end of the preview show’s emotional spectrum, a two-hour video created in 2017 by New York artist Leigh Ledare, entitled “The Task,’’ documents a session in a group therapy conference in which participants were asked to articulate the conscious and unconscious relationships between the racially and socially diverse people in the room.

The confusion, tension, and occasional explosions of bad temper in the video appear to underscore a need for social healing, although the nature of the discussion remains ultimately ambiguous.

As a wall label in the Transformer station show states, “The Task’' served as an early inspiration for members of the curatorial team led by Krishnamurthy.

Given the quality of the intriguing show at Transformer Station, the curators are apparently all getting along just fine. That bodes well for next summer’s big show.

It should give Cleveland and Northeast Ohio a solid second shot at grabbing global attention for a local art scene and a region with nothing but the highest aspirations. 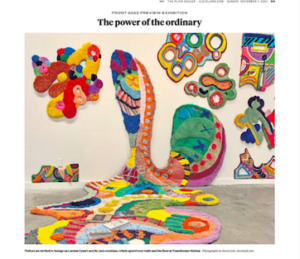