The poetic invocations of Langston Hughes ground the 2022 Front Triennial, an exhibition spanning over thirty sites across three cities in Northeast Ohio—Cleveland, Oberlin and Akron. At Transformer Station, a private museum owned by the Fred and Laura Ruth Bidwell Foundation in the rapidly changing Ohio City neighborhood, visitors are greeted by a series of archival reproductions of drafts of the poem from which the exhibition takes its title, Hughes’s “Two Somewhat Different Epigrams” (1957), showing the delicate changes the poet made to his now-famous lines. Within an exhibition focusing on healing and the civic potential of artistic processes, these records make visible the art and practice of revision, and stand here as a critical exchange on what it means to bear witness to the ephemeral.

It's a fitting opening for an exhibition featuring several community collaborations as well as activations of public commons, historic sites, and cultural institutions, and with several outstanding performance elements. A multi-day boat trip from Buffalo, New York to Cleveland’s harbor marked the beginning for Asad Raza’s performance work Delegation (2022). A brass band ushered participants into the Old Stone Church with a rendition of Civil Rights anthem “This Little Light of Mine.” Inside, the hushed moaning of vocalist LaToya Kent swept down from the balcony, while various musicians hummed away at instruments and electronic boards, many having travelled with Raza along Lake Erie. The next piece invited the audience to join in with their own gleeful shouts, dance and rhythmic claps. The entire performance felt ceremonial, like a glorifying exhale.

Ahmet Öğüt’s installation Bakunin's Barricade (2015–2022) at the Allen Memorial Art Museum in Oberlin is an inquiry into institutional collections as a social form. Drawing on the work of anarchist theorist Mikhail Bakunin, the piece reimagines the role of the museum in times of crisis. The installation includes a selection of thirteen works from the museum’s collection, placed among locally sourced objects like street signs, vehicles, construction debris, and fencing. Repurposing fine art as a defense system, the installation is constructed as a future action through an agreement that creates an opportunity for activists, organizers, or residents to borrow and activate this “barricade” during civic protests. The work is dense, pulling you in to read and reread all its many parts, from a sculpture by Doris Salcedo positioned on the floor within a tire to a painting by Raquelín Mendieta fastened to the top of a wooden palette. At the Cleveland Museum of Art, Julie Mehretu also worked within the permanent collection to curate an exhibition titled “Portals,” featuring the artist in a reflective dialogue between her own practice and the work of others. Including her architectural paintings, like Untitled (brigade) (2005) and eye of (Thoth) (2021), alongside works by Danny Lyon, Isamu Noguchi and Jacob Lawrence, the exhibition comments on the fortitude of organized bodies and thresholds across cultural media, geographies, and time periods.

Hughes’s beliefs about the capacity of dreams to affect the conditions of this country and the Black world at large are referents for a body of public artwork by Abigail DeVille, made in collaboration with residents from Cleveland’s Fairfax community, where Hughes lived as a teenager. The Dream Keeper (2022) is a series of sculptures located in Quincy Garden in partnership with Karamu House, the oldest producing Black theatre in the country, where Hughes presented many of his staged and musical works. Responding to Hughes’s “The Dream Keeper and Other Poems” (1932), DeVille’s sculptures are figurative installations made from mannequins, domestic objects, and the cast faces of surrounding neighbors; they reflect many of the ideas and images that circulate across the poems, including beauty, stars, imagination, song, love and darkness. DeVille has also created an installation within The Sculpture Center about the legacy of Black settlements and the salt mines 2,000 feet under Lake Erie, speaking to the geological abstraction of preservation, labor and migration. Together, these projects wield the legacy of generational dreams of home and care.

Also working through a community-centered project on dreams and memory, Jacolby Satterwhite’s public multimedia work Dawn (2021) at the Cleveland Clinic and video-game installation RDZ Dawn Arcade (2022) at the Cleveland Institute of Art are a monument to a community’s interior visions of utopia. Illustrations by Fairfax residents reflecting rituals and cultural practices around home, family, play, and worship are transformed into interactive digital animations facilitated by Kent and R.A. Washington, who initiated a multi-day art engagement with residents on a hyper-trafficked street corner in the neighborhood. The drawings depict scenes of smiling faces, frequented food spots, declarative statements around happiness, the names of kinfolk, memories of a first car or pet, and outlines of the built environment. The project delivers the message that the future is wholly local, embracing the quotidian as sublime.

Using the poetic fragments from his son’s writing, a series of monochrome sculptures “In Memoriam” (2020-2022) by Paul O’Keeffe are on view across three exhibition sites. Addressing the transformative scale of healing through the journey of mourning his son, the works recur in steely blue tones, from the bright light-reflecting pieces in plexiglass to the warm, opaque, and sparkling sculptures made with micaceous iron-oxide paints. Some feature the soles of shoes or stanzas from a poem laser-cut into steel; they evoke the reconstruction of grief and the timelessness of familial recovery.

Like the moisture that hangs thick in the morning air, ecologies of the body and land are ever-present throughout this second iteration of the triennial. This is true of the long-form project by collective Cooking Sections: a partnership with SPACES and an installation of dual aerating fountains, titled To Those Who Nourish (2022) located at North Coast Harbor. Cooking Sections’ work is largely shaped by ecological time, generating urgent connections to foodways and their impact on the natural environment. Over three years, they will work with a network of farms of various scales and regenerative agricultural practices to explore soil conservation strategies. This project seeks to raise awareness and spur action around the fertilizer runoff suffocating wildlife and creating hypoxia—lack of oxygen—in Lake Erie.

Each exhibition site poses a central question, exploring the sociality of transformation, the provocation of history, and the embodiment of joy. The triennial boasts a few surprises: its spotlights on forms of craft is notable, and it’s made up of a majority of artists of color with a sizeable inclusion of early-career and emerging voices, including an inaugural Art Futures Fellowship awarded to four local Black artists providing a financial stipend and professional development. Much is attempted across the exhibition. The sharp focus on the elasticity of intercivic power and pleasures is palpable, even corporeal. Instead of dust and the rainbow, Hughes’s poem once read “That without one, the other would not be.” This declaration is emitted throughout the triennial, especially from the works that forcefully ripple outside of the gallery and into the city. 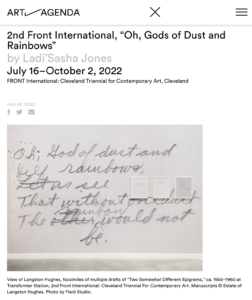