FRONT International, the new regional contemporary art triennial in northeast Ohio, announced today that Prem Krishnamurthy, a designer and curator based in Berlin and New York, and Tina Kukielski, the executive director and chief curator of the New York nonprofit Art21, will serve as artistic directors of its second edition, which will be held from July 17 to October 2, 2021.

After a more than two-month run, the inaugural edition of the multimillion-dollar exhibition closed in September 2018. According to an impact study by Cleveland State University’s Center for Economic Development, the triennial generated more than $31 million for the region. The report also estimated that the event netted about $115 million in sales revenue and more than $8 million in state and local taxes. 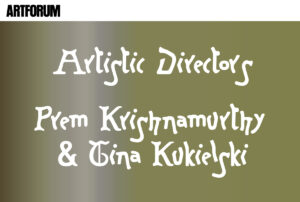