What’s the Transformer Station about?

Fred: It's a private museum, a place to show and share our collection. It's not really big enough for it all. We have a bit more than 1,000 works.

We organize two shows each year. Most of them involve our own collection. And we’ve invited artists to create new work around an idea we propose. Many of those works find their way into our collection.

We also developed this unusual idea of lending our galleries free of charge for half the year for two shows by the Cleveland Museum of Art. The only string attached is that they make their exhibits more daring than anything they do in the big, fancy place with the columns over on the East Side.

We also have small ensembles perform inside or at our park outside.

What’s in your collection?

Fred: We have world-renowned names like Hiroshi Sugimoto and Kehinde Wiley, but also local artists. We just showed Amber Ford from Cleveland right next to Zanele Muholi from South Africa, who's extremely hot in the international art market.

Michelangelo Lovelace painted a picture in Cleveland. A New York dealer took it to an art fair in Chicago. We bought it there, and it’s coming back to Cleveland.

What’s the FRONT Triennial all about?

Fred: FRONT is to showcase Cleveland as a hub for arts and culture, and also give Cleveland artists a platform to be seen by curators, collectors and art lovers from around the world.

Were you happy with last year’s FRONT Debut?

Fred: We had terrific success. We received positive reviews from around the world. 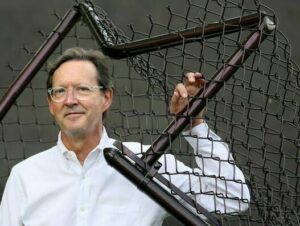 Fred Bidwell at the Transformer Station last year with an installation by A.K. Burns called “The Dispossessed.” Lisa DeJong/The Plain Dealer
← Previous Next →