The works on view, totalling 16 paintings and 16 drawings, depict Cleveland’s Glenville neighborhood. During FRONT 2018, Callaghan took up an informal art residency at FRONT’s PNC Glenville Arts Campus, documenting Glenville through ink sketches made during his exploration of the area. The artist then reproduces the sketches as larger drawings, exploring the interplay of his original, first-hand documentation of the scenes with memory and photography. Callaghan then expands upon these drawings in larger, full-color gouache paintings. The result is a chronicle not only of a place, but the aesthetics of memory—the evolution of form and color through time. Much of Callaghan’s practice involves these explorations of Cleveland neighborhoods, including a previous series on Collinwood, where he lives.

Callaghan’s 2018 residency was not a formal element of FRONT’s programming, but rather a natural product of the Triennial’s year-round support for Cleveland, and Northeastern Ohio, artists. “It was a case of right time, right place,” said Callaghan. “[FRONT founder Fred Bidwell] had an extra studio and I wanted to take advantage of the unique opportunity to see if I could apply a similar process that I used in Collinwood, on East 185th Street, and generate a new body of work.” While in residence, Callaghan also hosted a workshop for young painters. 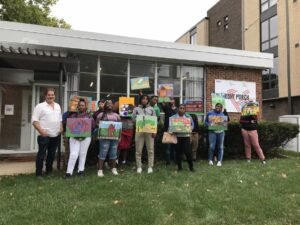 Callaghan standing with students outside the FRONT Porch, 2018.
← Previous Next →