Cleveland Gets an Art Triennial

If it can regularly bring tens of thousands of art lovers and international attention to a small, drab, industrial city in Germany, could art do the same thing for Cleveland?

A group of Cleveland boosters hopes to find an affirmative answer to that question in two years, when they kick off a new citywide triennial, to be called Front International: Cleveland Exhibition for Contemporary Art, a rust-belt rejoinder to venerated European art gatherings like Documenta, which happens every five years in Kassel, Germany. The Cleveland event, whose first iteration will be called “An American City,” will take place July 7 through Sept. 30, 2018, and is expected to feature the work of more than 50 international artists, under the guidance of two well-known contemporary-art figures: the conceptual artist Michelle Grabner of Chicago, who was one of the curators of the 2014 Whitney Biennial, and Jens Hoffmann, a globe-trotting curator and writer who works for the Jewish Museum in New York and the Museum of Contemporary Art Detroit. 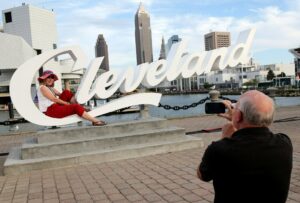 Visitors to Cleveland take in the skyline. A group of Cleveland boosters hopes to make the city a destination for art. Credit: Aaron Josefczyk/Reuters
← Previous Next →