The Fairfax neighborhood of Cleveland has had more than its fair share of hardships in decades past. But a new art exhibit celebrates the community through the creativity of New-York based artist Abigail DeVille, who’s set her focus on preserving not only its history, but its present.

DeVille builds her immersive sculptural installations around the forgotten or untold stories of people and places, uncovered through her extensive research on the cities in which she creates her works.

"Some people see a neighborhood and they see architecture or see a building that's to be cherished or given historical preservation," DeVille said. "But [they're] not actually looking at the humans that are occupying that space and being community and family with one another."

During several visits to Cleveland prior to the start of the FRONT Triennial for Contemporary Art, DeVille was drawn to the Fairfax neighborhood, particularly because the poet Langston Hughes resided there during his teenage years.

In Fairfax’s Quincy Garden, just steps away from the historic Karamu House, renown for producing Black theater, is the first exhibit in DeVille’s two-part installation. Her work is inspired by “The Dream Keeper,” Hughes’ 1932 collection of poetry for young people.

As part of her research, DeVille connected with several neighborhood residents whose personal accounts of living here helped her reconstruct the history of the area. Each resident had the option to have a plaster cast created of their face, which would later become part of the artwork in Quincy Garden.

Local artist Gwendolyn Garth inspects the casting of her face after it is removed. [Jean-Marie Papoi / Ideastream Public Media]

"It's a physical representation of people who lived in a specific time and place," DeVille said. "So just because it captured their likeness, that is historicizing them."

The companion installation to “The Dream Keeper” is located at the Sculpture Center. There, salt takes center stage as a nod to the salt mines located deep within Lake Erie and to its inherent function as a preservation agent, to preserve not only history but also the present.

“The Dream Keeper,” in two parts, is on view at the Sculpture Center, located near University Circle, and in Quincy Garden in the Fairfax neighborhood of Cleveland, through October 1. 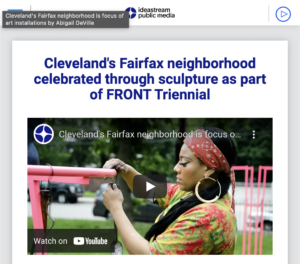