Michelle Shan-Jeschelnig’s business and philanthropic interests have made a material difference to Northeast Ohio.

She moved to Cleveland in 2002 to grow a piece of Northeast Ohio operations for Fives Group, a French industrial conglomerate. In addition, she assisted her husband in growing their family business, Bronx International Inc., into a leader in the supply of oil and gas exploration equipment, according to the nomination.

Shan-Jeschelnig — a native of China — is also deeply involved in the local philanthropic community. According to the nomination, “she believes that art and music are universal and can bring history and cultures together.” For example, she’s served on the boards and as a patron of the Cleveland Museum of Art, the Cleveland Orchestra and Front International: Cleveland Triennial for Contemporary Art.

In a letter supporting her nomination, William Griswold, director of the Cleveland museum, wrote, “Her business sense, passion for the arts and genuine kindness have had a great impact, not only on the Cleveland Museum of Art, but on everyone who has had the good fortune to know her and be touched by her warmth and generosity.” 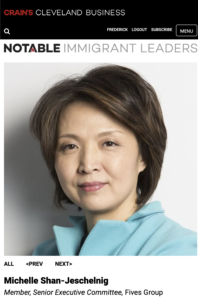