CLEVELAND, Ohio — The inaugural FRONT International: Cleveland Triennial for Contemporary Art in 2018 carried the title of “An American City” and focused on artworks that portrayed Cleveland as an urban archetype.

Now, channeling the zeitgeist of a city and a planet suffering from climate change and social and economic divisions, the organizers of the next FRONT exhibit in 2021 have made healing and transformation their new theme.

“The show will address difficulties, wounds, things that require healing,” Cleveland philanthropist and cultural entrepreneur Fred Bidwell, the show’s founding CEO, said in an interview before the event. But he said: “There’s a speculative sense of hope and optimism that change is possible.”

Bidwell created FRONT as a way to highlight Northeast Ohio’s capacity as a cultural center capable of attracting an international audience. The show is modeled after successful European visual art festivals such as Documenta, centered in Kassel, Germany, every five years.... 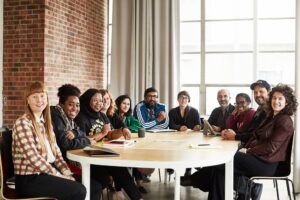