CLEVELAND, Ohio — The death of a child is a parent’s worst fear, a violation of the natural order that the oldest should die first. For Cleveland Heights artist, Paul O’Keeffe, that fear became a reality 10 years ago in May, when his son, Christian, who was about to turn 21, died by suicide in Kent.

It’s easy to imagine that people coping with such a loss, regardless of the cause, would change careers, take up a social or political cause, embark on a religious pilgrimage, or trek across America on foot or on a bike.

Inspired by visits to Lakeview Cemetery in East Cleveland over the years, where he observed a wide variety of memorials in traditional and contemporary styles, O’Keeffe, a retired professor emeritus of art at Kent State University, got to work in his studio.

He created a series of darkly elegant sculptures in layered and folded sheets of laser-cut steel painted in otherworldly tones of dark blue that combine abstract forms with fragments of poems left behind by his son, who was studying writing at KSU at the time of his death.

“I was in a state of shock,’’ O’Keeffe said. “I found a strange solace in starting to read my son’s poetry, in the sense that the years before his death, he had pulled away and wanted to be independent.”

O’Keeffe exhibited some of the sculptures in 2017 at The Sculpture Center in Cleveland in an exhibition entitled, “Screaming Voicelessly to a Distant Silence.”

Now, an expanded group of six sculptures exploring the grief, loss, and the poignant resonance of Christian O’Keeffe’s writings, will play a substantial role in the 2022 edition of the FRONT International: Cleveland Triennial for Contemporary Art.

Opening with two days of previews Thursday, FRONT is a sprawling exhibition of international, national, and local art involving works by 100 artists at 30 venues across Northeast Ohio including the Cleveland Museum of Art, the Akron Art Museum, the Cleveland Public Library, and the Cleveland Clinic and Case Western Reserve University Health Education Campus.

The theme of this year’s FRONT, which follows the inaugural exhibition in 2018, is that of art and art-making as a form of therapy and healing in response to trauma.

The show also explores the possibilities of joy and community at a time of sharp political and social divisions, exacerbated by the coronavirus pandemic, the national reckoning over racial injustice sparked by police killings of unarmed Blacks, and the Jan. 6, 2021, insurrection at the U.S. Capitol.

The show’s title, “Oh, Gods of Dust and Rainbows,’’ comes from a Langston Hughes poem imploring readers “to see That without the dust the rainbow Would not be.”

Prem Krishnamurthy, artistic director for FRONT 2022, said that O’Keeffe’s sculptures “relate very directly to the theme of loss and suffering and trauma, and how it can be transformed.”

Krishnamurthy went on to say that “what’s remarkable to me’' after O’Keeffe suffered the loss of his son, “is how he’s used the tools that he has at hand — the tools of art-making, the tools of sculpture, to work through it with his mind and his body.”

Krishnamurthy credited his former artistic co-director, Tina Kukelski, for advocating the inclusion of O’Keeffe’s work in the triennial. Kukelski stepped back from co-directing the show for personal reasons in 2020, but remains engaged as a member of a large group of advisors, Krishnamurthy said.

To emphasize the strong relationship between O’Keeffe’s work and the underlying theme of this year’s FRONT, the triennial is displaying his sculptures at three of its many venues.

A native of Dublin, Ireland, who speaks in soft tones with a gentle brogue, O’Keeffe, 64, attended St. Martin’s School of Art, London, and the National College of Art and Design, Dublin. He later won a Fulbright Travel Scholarship to study at the University of California, Los Angeles, where he earned a master of fine arts degree in 1981.

He has shown his work widely in solo and group shows at galleries and museums in Northeast Ohio, New York, Paris, London, and Dublin.

O’Keeffe said his FRONT pieces are different from earlier works of his that are primarily abstract and don’t include words.

“The moment you put text in a work, it particularizes it, even if the text is somewhat poetic,’’ he said.

Most of the works are painted in tones of dark blue, or Payne’s Gray with Flashe, a vinyl emulsion paint with a high ratio of pigment to medium that produces deeply saturated tones and a highly matte, non-reflective surface. A surface painted with Flashe in darker shades of color can appear to swallow light.

At the Transformer Station, a large sculpture features a row of discs resembling typewriter keys incised with letters spelling out the words “I Love Everyone,” a statement O’Keeffe said he found in a notebook his son left open on a sheet in his bedroom in Kent.

The letters float above layered plates of steel perforated by elaborate, laser-cut openings. One of the plates is adorned with a pair of shoe inserts that seemed to indicate the absence of a person who might have worn the shoes.

Another work, entitled, “In Memoriam (I Wanna Be Pure),” resembles an elaborate, wall-mounted bench comprised of geometric forms and accompanied by a pair of boot soles on the floor, again suggesting a human presence, or absence.

The installation at the Akron Art Museum, measuring 30 feet long, is designed to evoke the circumstances of Christian O’Keeffe’s death as he was struck by a train on tracks along the Cuyahoga River near Kent.

The work features a long, slender rail inscribed with what O’Keeffe called “a very beautiful poem’' in which his son is “imagining in a heightened, almost exhilarated state, how his body is going to fuse with a freight train.”

The sculpture culminates in a frame-like form the artist sees as a kind of mirror that marks a point of transition or departure.

Christian O’Keeffe was the third of four children born to O’Keeffe and his former wife, Kathy O’Keeffe. Following a divorce, O’Keeffe married Natasha Levinson, with whom he has a fifth child.

O’Keeffe said that prior to his death, Christian suffered persistently from serious injuries after he was attacked by two men while traveling alone in New Mexico during the summer of 2011.

Christian was fascinated with the writings of Beat Generation authors including poet Allen Ginsberg and Jack Kerouac, author of “On The Road,’’ and wanted to emulate their example by traveling alone across the U.S. by bus. He also visited poets in meetings arranged for him by a KSU professor.

“The nature of the suicide is you have a level of guilt, of not being on top of everything,’’ O’Keeffe said. “With Christian, letting him go away for the summer and do his own thing — I have regrets. I suppose one wants a level of control over your children’s lives, but you can’t really have it, I guess.”

O’Keeffe said he would have made the sculptures on view in FRONT 2022 with or without the triennial, but he’s grateful to the show’s organizers for inviting him to expand on the projects he originally exhibited in 2017 at The Sculpture Center in Cleveland.

The experience has been, for him, a form of healing, of moving through a period of profound grief.

“I don’t know that it helps me process,’’ he said, “It lets me ruminate in a way, which may not be entirely healthy.”

But he said: “I’m very happy to have been able to make these pieces,’’ he said. “I’m hoping — I don’t know if it’s possible to get closure from making a body of work or not — but I have moved on from thinking about it in a fairly obsessive way.” 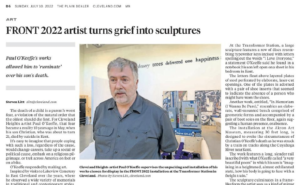