The inaugural FRONT International triennial will use art to showcase Northeast Ohio and shine a light on its neighborhoods, including Glenville

About 40 years ago, Cleveland-based artist Dale Goode painted a mural depicting abstract, African-American faces at East 105th Street and Superior Avenue in Cleveland’s Glenville neighborhood. At the time, there were few, if any, murals in the neighborhood despite them popping up elsewhere in the city.

Although Goode says his mural was intended to spur prominent displays of art in Cleveland’s predominantly African-American communities, like Glenville, the neighborhood’s art scene never gained momentum. In fact, the building on which his mural was painted was torn down just a few years ago. Still, Goode and other community leaders insist the neighborhood’s culture continues to lend itself uniquely to an arts scene that simply hasn’t yet been fully realized. 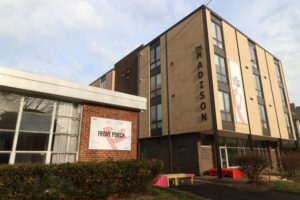