Hosted by the Downtown Cleveland Alliance (DCA), the award ceremony highlights major downtown development projects and recognizes the 2018 Ruth Ratner Miller Achievement Award recipient at its annual luncheon. The luncheon will be held on Friday, October 26th at 11:30 am. FRONT International will accept the award for the Canvas City project, undertaken for the inaugural edition of FRONT International: Cleveland Triennial for Contemporary Art, An American City.

Conceived in recognition of earlier efforts at introducing public art into the civic fabric of Cleveland, Canvas City was inspired mural painted in 1973 by Julian Stanczak, Carter Manor, as part of a civic project titled City Canvas.

FRONT has recreated the original painting as a legacy project, connecting early public art efforts to new currents and introducing artists whose work will engage in conversation across downtown Cleveland for years to come.

FRONT developed its Canvas City project as a long-term effort to make downtown Cleveland into the world’s largest outdoor exhibition of contemporary abstract painting. In addition to the Stanczak painting, FRONT has completed murals by Kay Rosen and Odili Donald Odita. In the coming three years, new murals are planned by Heimo Zobernig, Sarah Morris, and Michelle Grabner.

“We are pleased to be contributing to the dramatic revival and reinvention of Downtown Cleveland”, said Fred Bidwell, Executive Director of FRONT. “The Canvas City project celebrates both the legacy and the future of Cleveland as an important cultural hub and we hope it will be a destination for the region and the nation for years to come.”

The Canvas City project was made possible with generous support by The Char and Chuck Fowler Family Foundation, Sherwin-Williams Company and the John P. Murphy Foundation.

Experience all of the murals on the free Virtual Reality FRONT: Canvas City app. Developed by the Cleveland Museum of Art’s Digital Innovation and Technology Services team. Click here to download the app.

FRONT International: Cleveland Triennial for Contemporary Art is a Triennial exhibition comprised of artist commissions, performances, films, and public programs that launched its inaugural edition in July of 2018. An American City: Eleven Cultural Exercises, in collaboration with museums, civic institutions, and alternative spaces across Cleveland, Akron and Oberlin, showcased an ambitious roster of projects, including performance and theater throughout the landscape and built environment. With a roster of national, international and area-based artists at all points in their career, FRONT examined the ever-changing and politically urgent conditions of an American city. The next edition of FRONT will take place in Cleveland and Northeast Ohio in the summer of 2021. 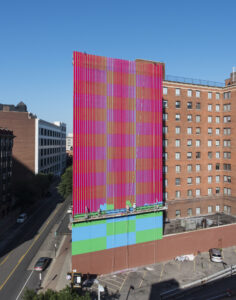