CLEVELAND, Ohio — Visitors to the quintet of exhibitions at the Cleveland Museum of Art organized as part of the FRONT International: Cleveland Triennial for Contemporary Art, are in for a delightful, thought-provoking shock.

Gallery 218, the so-called “Glass Box’' on the south end of the museum’s East Wing, normally hosts a collection of French 18th- and 19th-century sculptures. Now it has been transformed into something resembling a realization of Claude Debussy’s 1910 piano Prelude, “The Sunken Cathedral.”

The Debussy composition evokes a Breton myth in which the sea engulfs the fictional city of Ys in retribution for sins committed by Dahut, the daughter of King Gradlon. Debussy’s music evokes the Breton belief that on clear mornings, the cathedral rises dripping from the sea to ring its bells, only to submerge again beneath the waves.

The installation in the museum’s gallery isn’t specifically related to the Breton myth or the Debussy composition, but it certainly resonates with them.

Firelei Báez, an American artist of Haitian and Dominican descent based in New York, intended her large-scale installation to embody a reimagination of San Souci Palace in northern Haiti. The structure was built as the home of Haiti’s first monarch, Henri Christophe after enslaved Africans achieved independence from France in 1804 in a bloody revolution. Damaged by an earthquake in 1842, the palace is now a ruin.

The Báez installation represents a tilted section of the palace, whose name means “without care’' in French as if it were rising from the sea, encrusted by coral and littered with modern-day trash that has sunk below the waves.

The ruin appears to burst from the gallery floor like the cathedral of Ys, rising high toward the lofty ceiling, and disrupting the room’s placid, crystalline design.

There’s another deep cultural resonance here, to the 16th-century “Garden of Monsters’' in Bomarzo, Italy, about 75 minutes north of Rome. Attributed to architect Pirro Ligorio, the garden is filled with fantastic and grotesque creatures carved in stone, now covered in moss. It also includes a tilted, open-air palace with off-kilter rooms that induce dry-land seasickness because the floors inside are not in sync with the horizon outside.

Nadiah Rivera Fellah, the museum’s associate curator of contemporary art, who worked with Báez to realize the FRONT installation, said that instead of tapping into Debussy or the Garden of Monsters, the artist was motivated both by a desire to evoke the cataclysmic history of Haiti and French colonialism, along with another oceanic myth related to slavery, that of Drexciya.

Invented in the 1990s by a Detroit band of the same name, the Drexciya myth holds that the children of pregnant enslaved Africans who were thrown overboard to drown during the Middle Passage swam from their mother’s wombs to establish an underwater empire.

Stenciled in turquoise and white with images of raised fists and broken chains, Báez’s palace walls signal defiance, and triumph, even as they appear to crumble and perhaps sink back into the sea.

The work’s complex imagery and numerous cultural echoes make it an ideal entry point for this year’s FRONT, dedicated to the idea that art can promote healing from traumas affecting individuals, communities, and entire societies.

The triennial, which opened with previews on July 14, will run through Oct. 2 with exhibits of works by more than 100 artists at 30 venues across Cleveland, Akron, and Oberlin, including the Cleveland Museum of Art, which has five individual FRONT components, including the Baez piece.

Upcoming reviews will dive into additional portions of the triennial, a brainchild of Cleveland-based philanthropist, collector, and cultural entrepreneur Fred Bidwell. But if you’re looking for a place to get started on FRONT 2022, the museum’s East Wing Glass Box is ideal.

In addition to its rich imagery, the Báez piece occupies a strategic location in the museum’s footprint at the beginning of a sequence of galleries that trace the rise of modernism, represented mainly through French art.

As such, the Báez installation opens a fresh perspective on how all the wonders of French 19th-century painting, from Camille Corot’s idyllic landscapes of Italy to Claude Monet’s waterlilies, emerged from a society busily engaged in colonial exploitation.

Another FRONT exhibit makes an even more explicit connection between contemporary art and the museum’s collection.

Integrating past and present

FRONT’s curatorial team, led by Artistic Director Prem Krishnamurthy, invited New York-based artist Julie Mehretu, a native of Ethiopia who grew up in East Lansing, Michigan, to create a show in the museum’s Focus Gallery blending her own works with selected pieces from the museum’s permanent collection.

(Later this year, Mehretu will visit Cleveland to prepare for a FRONT commission to paint a mural on the soaring south facade of the Standard Building overlooking Public Square.)

Mehretu is known for making complex abstractions suggestive of vast landscapes and zooming perspectives. That aspect of her work is embodied in “Untitled (brigade),’’ a 2005 black-and-white painting in ink and acrylic on view in the Focus Gallery that’s filled with networks of lines suggesting force fields of energy swirling around finely detailed birdseye views of fortified cities.

The painting’s energy and grandeur make it completely understandable why Mehretu included in the show a watercolor of an Alpine landscape by J.M.W. Turner, the 19th-century English master of vast scenes, as an influence on her work.

In this and other comparisons between her own work and those of historical artists whose work inspires her, Mehretu’s exhibition demonstrates how artists can integrate past and present that go beyond the typical classifications of art history.

That’s not strictly speaking a precise embodiment of the theme of art and healing, but Krishnamurthy said in an interview he never wanted this year’s FRONT, which he assembled with a large team of collaborators and curatorial advisors, to be a schematic and literal interpretation of a central guiding idea.

For example, a pair of works by the Japanese artist Yoshitomo Nara exhibited in the museum’s contemporary art galleries, represent two stages in the artist’s creative journey. One involves his ongoing exploration of unsettling, cartoonlike images of children.

The other is a glazed ceramic vessel that embodies his interest in “wrestling with a large piece of earth’' as a way to reaffirm his interest in art-making following the 2011 earthquake and tsunami that struck the Fukushima Daiichi Nuclear Power Plant.

An exhibition of recent prints by New York-based artist Nicole Eisenman embodies the notion that art-making can emerge from practices that connect an individual artist to communities of makers.

Eisenman’s energetic prints, merging acute observation and a loopy, idiosyncratic style of drawing, depict contemporary activities such as waiting in line during the pandemic to enter a movie theater.

Presented in multiple colored and black-and-white versions and variations produced over the past decade in collaboration with several New York print studios, showing how a team of technical experts had lifted an artist to greater heights of imagination and expression than she could achieve on her own.

A more literal interpretation of FRONT’s theme this year can be found in the museum’s photography gallery, featuring photos by Matt Eich, based in Charlottesville, Virginia; and Tyler Mitchell, based in New York.

Eich’s astonishingly beautiful photographs of his children playing at home or wading in creeks or balancing on logs grew out of the typical parental activity of recording family life through photographs.

But there’s a vast gulf between typical snapshots taken on a cellphone and Eich’s lyrical and poised images, which seem driven by the impulse to capture transitory moments of heightened perception, whether sparked by the sight of distant cumulus clouds or one of his daughters twirling a bouquet of wildflowers.

One particularly beautiful image, entitled “Meira Rainbow,’’ 2021, captures rays of light refracted through a prism as they fall across the face of Eich’s older daughter in a darkened room, grazing her nose, left eye, and blonde hair. The image turns a random moment into something transcendent.

That’s directly in line with FRONT’s title this year, “Oh, Gods of Dust and Rainbows,’’ taken from a couplet by Langston Hughes. The rest of the line says: “help us see That without dust the rainbow would not be.”

Adjacent photos by Mitchell, who made history as the first Black photographer to shoot a cover for Vogue in 2018 with an image of Beyonce, are part of a project to envision a Black utopia in America.

Mitchell’s photos depict Black men, women, and children enjoying nature in ways that echo 19th-century paintings by American artists such as Winslow Homer and Thomas Eakins, but with the twist that Black subjects are depicted in a context more commonly associated with images of whites.

In one especially large photograph, members of what appears to be an extended family relax on the shore of a pond in the sun or in shade cast by a stand of tall pines.

A trio of women, perhaps representing three generations, relaxes on a blanket set down in the tall grasses. Three boys walk down a path to the water for a dip. A woman in the distance stands at an easel, painting a view. Further away, a mother holds an infant on her hip and gazes at the water.

Mitchell’s photographs dwell on the healing power of nature and outdoor play, and they suggest that a country divided by race and bitter politics may yet seek redemption and justice.

Such visions might be as fleeting as a rainbow, but as the FRONT 2022 exhibits at the Cleveland Museum of Art demonstrate, they’re well worth imagining. 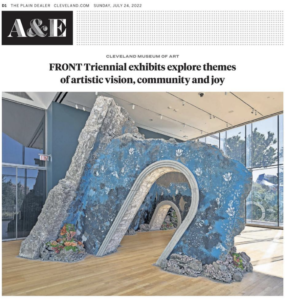