This summer, the FRONT International: Cleveland Triennial for Contemporary Art aims to be a rainbow of sorts – an exhibition of brightness and healing across Northeast Ohio following a very hard storm.

Launched in 2018, FRONT will return to welcome international artists to 20 Northeast Ohio sites on July 16, running through Oct. 2.

Titled “Oh, Gods of Dust and Rainbows,” the second iteration of the contemporary art festival aims to approach and embrace art as an agent of transformation, a mode of healing and a therapeutic process. The name is in homage to a 1957 poem, “Two Somewhat Different Epigrams” by Langston Hughes: “Oh, God of dust and rainbows, help us see. That without dust the rainbow would not be. I look with awe upon the human race. And God, who sometimes spits right in its face.”

Prem Krishnamurthy, artistic director of the 2022 FRONT triennial, said the theme and title of this year’s triennial dates back to 2019, after copious research and several visits to regional artistic hubs like Cleveland, Akron and Oberlin, visits with institutions and partners in those communities, artists and other historical or contemporary sites that seemed important to the curatorial team.

“It came out of thinking about the history of the region, and the kind of industrial production that produced prosperity and wealth, but also had negative effects on the environment and on social infrastructure,” Krishnamurthy said. “And also the very fraught and challenging relationships that do exist in Cleveland and the region between different kinds of communities.”

After the theme was announced in January 2020, Krishnamurthy said full-scale planning for a 2021 event began. But, little did anyone know what the next two years would bring, and how the theme would remain relevant – almost too much so – he added.

Amid the COVID-19 pandemic, FRONT was postponed until 2022.

“What has been important is to think about how art works in all of these different time frames,” Krishnamurthy said. “That fact that art making, exhibition making and triennial making are all longterm processes that do not emerge in a day. At the same time, there are these ways in which art can create pleasure and joy and bring people together around shared aesthetic experiences, which can happen very quickly. Almost like a rainbow – they’re very fast, but can quickly produce a sense of community and belonging between people who don’t know each other.”

Following two years of limited physical interaction and collaboration, Krishnamurthy said one of FRONT’s priorities was to tap into the local aspect of the triennial, working closely with area venues to create an “exhibition of exhibitions.” That sets FRONT 2022 apart, to some extent, from the inaugural event in its effort to ensure artwork by international artists fits with existing collections at each local institution.

“With each partner institution, we have been in conversation for about three years now trying to find artists who make sense within their program and resonate with the people who are already there,” Krishnamurthy said. “We’ve worked with them to present a set of artists who are living in Cleveland alongside artists who aren’t in Cleveland but whose work can be seen in dialogue. It’s become a rich dialogue between the venues and us – which is a bit of a change from the first FRONT. Each venue will be a rich experience.”

The pandemic experience also brought about an interest in public artwork, Krishnamurthy said. One example to be exhibited is “Dawn” by Brooklyn, N.Y.-based artist Jacolby Satterwhite, who worked with local contributing artists RA Washington and LaToya Kent to ask residents of Cleveland’s Fairfax neighborhood to describe and draw their version of utopia. This exhibition will be on display at the Cleveland Institute of Art in the University Circle neighborhood as a virtual reality arcade and as a freestanding sculptural screen outside of the Cleveland Clinic’s new BioRepository building in the Fairfax neighborhood.

“Jacolby’s work is a good example of non-traditional exhibitions and installations happening at museums or art venues, but also at non-art venues and even in public spaces,” Krishnamurthy said. “I think that is important because ultimately, FRONT is a free, open art event meant to invite and engage as many people as possible.”

As Satterwhite’s first public artwork in collaboration with Cleveland communities, “Dawn” uses a combination of traditional and digital media to explore the ideas of contentedness and utopia from the perspectives of 100 Fairfax residents who contributed drawings to the project.

“I thought (Kent and I) should get involved because you need a fine touch to get the community to participate,” Washington said. “I thought it was right up our alley and that we could help deliver these interesting stories from the community. We wanted to serve as emissaries.”

Kent, who previously worked in the community at a transitional house for formerly incarcerated women, said she noticed the neighbors had a lot of interesting stories, in part due to the neighborhood’s foundation built over generations.

“It felt a strong sense of family and solidarity,” she said. “I found a lot of people, once they knew what we were doing, they were getting on the phone and telling other people to get involved. You saw this interconnectedness within the neighborhood and the residents.”

As the project continued, Kent said she noticed some of the submissions reflected that residents felt their current living situation was their definition of utopia. This was evident in participants who came from the Alcoholics Anonymous meetings held across the street from where they were set up, who Kent said had a “beautiful inspiration from their experience there.”

“It wasn’t some distant fantasy,” she said. “It isn’t a stretch from what they desired. It seemed that being able to be supported in their neighborhood seemed like something beyond their dreams in a way. I felt a sense of euphoria from that group of people – they were being served properly, and all of us want to be seen, served and respected.”

That concept of being seen, served, respected and involved permeates through many of FRONT’s 2022 exhibitions, Krishnamurthy said.

Other exhibits on that theme will include Kameelah Janan Rasheed’s community-driven explorations at the Cleveland Public Library. Her project will be anchored by a generative prompt like “Tomorrow, there will be ...”. Rather than content, the artist provides a protocol for engagement. Renée Green’s “Contact,” a sprawling exhibition occupying all of moCa Cleveland’s public spaces, seeks to interweave conversation around other participating artists’ works. At Transformer Station in the Ohio City neighborhood, Sarah Oppenheimer and Tony Cokes are developing a large-scale participatory installation that combines tactile and interactive interventions into architecture with videos that investigate representations of race, gender and class using text and music.

“Some of these projects are almost like rainbows,” Krishnamurthy said. “They’re things that are more ephemeral and fleeting, but might bring together a certain community at a certain time for a certain purpose. I think the experience of visiting FRONT, whether from out of town or from Cleveland, is a little bit like a treasure or a rainbow-spotting adventure.”

Similar to karaoke, Krishnamurthy said he wants visitors to approach the 2022 triennial as sharing joy with strangers – the “aesthetic pleasure of art can bring people together across differences.”

“It’s not just the color of a beautiful painting or something that strikes you as pleasurable or fun,” he said. “It’s things that kind of slow you down, that are actually complex and make you think about or experience things in ways you haven’t before. I want people to come out of this with a sense of being moved. To feel like they don’t have to just sit or stand in front of a painting, but are whole bodies. And that something happens by experiencing art in a space with other people.” 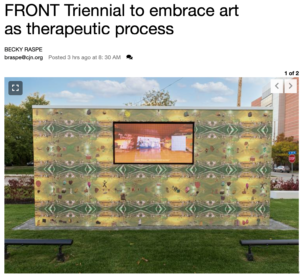