Glenville's Apartment By The Park

In her Glenville apartment building, Julie Ezelle-Patton cultivates a community of artists and preserves her mother's legacy as a painter. But new development threatens it all.

For many years, near East 105th Street and Ashbury Avenue, there stood a cottonwood tree. It grew and grew and grew, close to the back wall of an art deco-style gas station until, with its offspring, it made the boarded-up building a piddly little thing, swallowed by a puddle of mighty shade. When the wind swished, the oval leaves conjured the rain.

Then the men in hard hats came in their pickups, with their blueprints and notions of progress and cut the tree down. Their backhoes toppled the gas station and churned the urban farm next door, until where the tree rooted was blank. And the hard-hatted men could begin again.

Julie Ezelle-Patton watches them from the dining room table of her third-floor Glenville apartment. A poet, she wears a roughly sewn blue sweater and an orange and blue head wrap that makes her appear at least 6 inches taller. 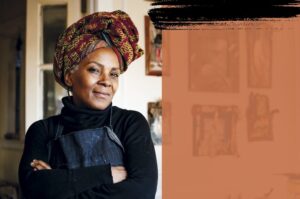