This exhibition has been conceived of by the Co-Artistic Directors, Michelle Grabner and Jens Hoffmann, following an invitation by FRONT International CEO & Executive Director Fred Bidwell. The first edition, entitled An American City, will take place July 7 to September 30, 2018, and aims to rethink the conventional Biennial or Triennial exhibition model.

Featuring more than fifty international artists, An American City will include site-specific artistic interventions throughout the city, public programs, artistic and curatorial residencies, a temporary academy, a web-based art journal for the Midwest, and a number of solo and group exhibitions with a wide range of collaborators. Research will focus not only on Cleveland’s most celebrated and stereotyped characteristics, but also on its overlooked elements: little-known locations, historical curiosities, marginalized subcultures. Objects from Cleveland’s collecting institutions will be exhibited in thematic presentations, along with remarkable documents and photographs drawn from the city’s archives. The exhibition becomes a dynamic system of dialoguing components, rather than a static and invariable display of art objects.

Bidwell comments, “This unique European-style citywide exhibition model, paired with the ambition of FRONT, could only be made possible in the city of Cleveland. The unprecedented and unmatched collaboration of Cleveland’s superb visual arts and cultural institutions, spread across the complex landscape of an industrial city in transition, will offer North America a provocative contemporary art experience driven by ideas. We are thrilled to have both Grabner and Hoffmann as our Co-Artistic Directors leading this vast global endeavor, who together have both Midwestern roots and an international foothold in the contemporary art world. FRONT will inspire its visitors to experience the wealth of cultural and artistic opportunities inherent to Cleveland.”

Grabner and Hoffmann’s curatorial premise and complementary styles take stock of Cleveland, a city marked by change and hybridization. Grabner and Hoffmann state, “Cultural identities are multilayered, conflicted, and vary in hyper-local ways. An American City investigates the complex processes by which Cleveland is being constantly undone and rebuilt. Treating the city as both paradigm and physical site, this citywide initiative will tease out the ways in which contemporary experiences of an urban location are shaped by historical and current events, and uncover how the city’s collective memory and sociopolitical imperatives can define artistic and curatorial production.”

An American City will fan out to notable Cleveland sites such as the Rock and Roll Hall of Fame, FirstEnergy Stadium (home to the Cleveland Browns), the Great Lakes Science Center, and City Hall. Several of the exhibition’s twenty new commissions will reinterpret or remake an existing site on an architectural scale. Participating artists will engage with the city’s neighborhoods, dispersing the exhibition while bringing Cleveland’s heterogeneity and topography into focus. Artist residencies lasting several months will nurture the production of new work, and channel Cleveland’s rich history and its dynamism.

Throughout the exhibition, Transformer Station, Cleveland, a onetime railway substation turned contemporary art space, will operate as a hub and temporary academy housing conversations and workshops. The academy will involve, among many other constituencies, students in the immediate area as well as from Columbus, Chicago, and Detroit.

An American City is made possible through the Cleveland Foundation, whose lead gift supports the appointment of co-artistic directors, Michelle Grabner and Jens Hoffmann. Grabner and Hoffmann will assemble a team of local and regional curators, as well as a national and international group of Global Delegates, who will advise and help shape the curatorial program. Additionally, the curatorial team will nominate six international artists for the fall 2017 cohort of the Cleveland Foundation’s three-month artist residency program, Creative Fusion. The Creative Fusion artists will work with FRONT to create new work for An American City.

Ronn Richard, President and Chief Executive Officer of the Cleveland Foundation comments, “The Cleveland Foundation has long believed in the power of art in bridging cultures, uniting people and celebrating new ideas.” He adds, “We are proud our support will enhance the international focus of FRONT, aligning it with our international artist in residency program, while putting more global eyes on Cleveland and helping Cleveland connect with the world.”

FRONT International: Cleveland Exhibition for Contemporary Art is also receiving major support from the George Gund Foundation for the two-year Associate Curator Fellowship for this inaugural edition. The Cleveland-based associate curator will work with the artists and assist in the planning and production of the festival. “Cleveland’s rich and diverse arts community provides an ideal location for the region’s first contemporary arts festival” stated David Abbott, Executive Director of The George Gund Foundation. “We are pleased to fund the assistant curator fellowship position that will help forge a strong bond between the curatorial team, the artists and our city.”

The support of Cleveland Foundation, the George Fund Foundation, and Founding Patrons Richard and Michelle Jeschelnig, Scott Mueller, Sandy and Sally Cutler, Jan Lewis, and Fred and Laura Ruth Bidwell, in addition to FRONT’s Board, have laid the foundation for An American City’s nearly $5 million budget. 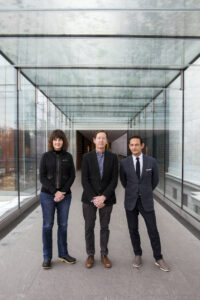