The Triennial opens this week with contributions from artists including Cooking Sections, Jacolby Satterwhite, and Julie Mehretu.

FRONT International: Cleveland Triennial for Contemporary Art today announced the inaugural recipients of the Art Futures Fellowship, worth US $25,000 each. They are: Amanda D. King, Antwoine Washington, Charmaine Spencer, and Erykah Townsend.

The award, given to artists of colour working in the region, helps kick off the event's second edition, which runs from 16 July to 2 October across more than 20 sites in Cleveland, Akron, and Oberlin.

Conceived by Tina Kukielski and Prem Krishnamurthy, the 2022 Triennial takes its title Gods of Dust and Rainbows from a 1957 poem by Langston Hughes, who moved to Cleveland as a child. It explores art's therapeutic and transformative powers.

Cooking Sections, To Those Who Nourish (2022). Commissioned by FRONT International: Cleveland Triennial for Contemporary Art with support from The Andy Warhol Foundation for the Visual Arts and in partnership with North Coast Harbor, Downtown Cleveland Alliance, Great Lakes Science Center, and the US Army Corps of Engineers. Photo, courtesy, and © Cooking Sections.

Among the highlights are two fountains installed by Cooking Sections to help re-oxygenate Lake Erie, a video installation Jacolby Satterwhite developed in dialogue with residents of Cleveland's Fairfax neighbourhood, and an 18-storey-tall mural by Julie Mehretu, which will be unveiled in 2023.

By far the Ethiopian-born abstract painter's largest work to date, the mural will be painted on the windowless south facade of the Standard Building in downtown Cleveland overlooking the historic Old Stone Church and Public Square.

It will be the fourth and largest mural commissioned for FRONT's Canvas City public arts programme, which launched in 2018. Inspired by Cleveland's City Canvases project of 1973–1974, the programme has already produced murals by Julian Stanczak, Odili Donald Odita, and Kay Rosen.

Mehretu suggested in April that the work will be ephemeral, interacting with changing shadows cast by the neighbouring historic church's spires, and evocative of 'the ghosts of the past'.

In an interview with local media she said she was drawn to Cleveland's industrial history, it's significance as an important stop on the pre-civil war Underground Railroad, and the socially driven racial segregation occurring in the city's neighbourhoods and suburbs.

On 2 October Mehretu will host a town hall-style conference at the Cleveland Museum of Art as a starting point for her work on the mural.

During the Triennial, Julie Mehretu will also exhibit some of her paintings alongside works chosen from the collection at the Cleveland Museum of Art in the exhibition Julie Mehretu: Portals from 16 July to 13 November. A total of 75 artists feature in the Triennial this year. Among them are international names such as Yoshitomo Nara, Tacita Dean, Robert Reed and John Akomfrah. 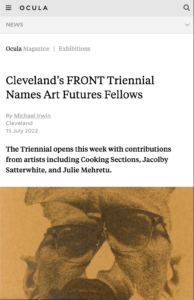