IN SEPTEMBER 1986, the United Way of Greater Cleveland released nearly 1.5 million helium-filled balloons into the atmosphere in an effort to celebrate the city, raise funds, and break a world record. A crowd of onlookers cheered as the mass of multicolored latex orbs ascended like a fantastic murmuration of starlings. They engulfed the city’s iconic Terminal Tower before beginning to disperse. But weather conditions soon changed, causing the inflated balloons to drop from the sky, and they slowly rained down on the city like comedic fire and brimstone; they are believed to have contributed to the deaths of two missing fishermen, the search for whom was hindered by the hundreds of thousands of balloons that landed on the waters of Lake Erie. 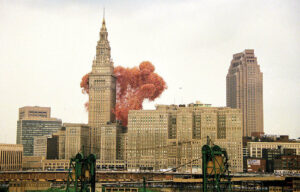