CLEVELAND, Ohio — The FRONT International: Cleveland Triennial for Contemporary Art is many things wrapped up in a single, glorious, regionwide package of contemporary art, film, and performance.

Fundamentally, though, It’s a sprawling, summerlong exhibition of works by 100 global and local contemporary artists on view through October 2 at 30 venues across Cleveland, Akron, and Oberlin.

Conceived by philanthropist and arts entrepreneur Fred Bidwell and inaugurated in 2018, FRONT is intended to put Greater Cleveland on the art world map as a global destination on the order of Kassel, Germany, which has been holding its world-famous Documenta exhibition every five years since 1955.

As much as anything, however, FRONT is a scavenger hunt. It’s an invitation to get out and explore, using contemporary art as a lens through which to see Cleveland and Northeast Ohio with fresh eyes.

That’s especially true because FRONT’s exhibits, installations, and outdoor displays go far beyond the normal spaces where one expects to find contemporary art, such as the Cleveland Museum of Art, the Akron Art Museum, and the Transformer Station gallery, where FRONT shows have been described in previous reviews.

Encounters with FRONT can also be had in parks, libraries, and unusual locations such as the National Museum of Psychology at the University of Akron’s Cummings Center.

A day of exploring FRONT last week led me from the sleek, beautifully designed Reinberger Gallery at the Cleveland Institute of Art to University Circle’s Wade Oval; the Syrian Cultural Garden in Cleveland’s Rockefeller Park; North Coast Harbor on the downtown lakefront; and to the architecturally incomparable Brett Hall at the Cleveland Public Library’s Main Branch at 325 Superior Ave.

The journey was an immersion in the city as much as it was a day of marinating in scores of artworks by dozens of artists. And it left a strong impression that for all its flaws, foibles, inequalities, and injustices, Cleveland is a pretty fantastic city.

That’s especially fitting because FRONT’s theme this year, according to its handbook, focuses on “the idea of art and art-making as a mode of healing and therapy’' and “as a way for communities to address the violence and traumas of our past and present.”

The theme of healing and transformation grew out of responses by FRONT’s organizers, led by artistic Co-director Prem Krishnamurthy, to a 1957 poem by Langston Hughes that includes the line, “Oh, Gods of Dust and Rainbows, help us to see That without the dust, The rainbow would not be.”

More about my latest dive into FRONT in a moment. First, some tips about how to see the exhibition.

No. 1: Consult printed guides. Free FRONT programs printed on newsprint in tabloid format are available at all indoor exhibit venues. The tabloid includes maps, addresses, and exhibit information. Also available at venues with retail shops is a $10, 152-page paperbound handbook with a bright, pink cover.

The pocket-sized book is a well-written miracle of concision and a worthy keepsake. It also includes a three-page layout in which to paste collectible stickers available at a dozen principal FRONT venues. Think of them as stamps you’d want in your passport.

No. 2: Check schedules: For all their virtues, the printed resources don’t include operating hours for all of FRONT’s indoor venues. Be sure to consult websites before you go so you’re not disappointed. Most locations are open from Thursday through Sunday, but some are closed Monday, Tuesday, and Wednesday, and some are closed Sunday. The frontart.org website is the best place to look for numerous concerts, lectures, symposia, screenings, and other events that are also part of FRONT.

No. 3: Map your route: As a touring experience in an automobile-oriented region, FRONT requires gas in the tank, time behind the wheel, and places to park. Seeing a half-dozen venues in a day requires hopping around a lot. Venues downtown, or along the Euclid Avenue HealthLine bus route, can be reached easily via transit. Others, not so much. If you’re driving, and especially in downtown Cleveland with its antiquated parking meters, bring plenty of quarters.

I took my most recent plunge into FRONT on Tuesday. It wasn’t the best day because many venues were closed. But I embarked anyway, reasoning that there was still plenty to see and do, and I was right about that.

Here’s what I found:

The Cleveland Institute of Art, 11610 Euclid Ave., has an excellent collection of FRONT exhibits by eight artists. They include:

- An emotionally engaging immersive virtual reality installation by New York artist Jacolby Satterwhite. Viewers can use pushbutton panels or Xbox controls to explore an idealized digital urban neighborhood, which grew out of Satterwhite’s conversations with residents of the Fairfax neighborhood in which he asked: “What does Utopia look like to you?”

- An excellent mini-retrospective exhibition focusing on the collages and prints of Cleveland artist Dexter Davis, a 1990 graduate of the Cleveland Institute of Art who works as a security guard at the Cleveland Museum of Art. Text panels in the exhibit describe how Davis has used the ritual of art-making as a way to recover from traumas including a gunshot wound he suffered as a passenger in a car during a daytime road rage shooting in University Circle in July 2020. The Davis installation also includes “Color Me Boneface,’’ a cycle of documentary films on Davis’ art and life by Cleveland filmmaker Robert Banks that evolved during a recent residency at the Museum of Contemporary Art Cleveland, another FRONT venue nearby. The films have a raw, grainy integrity that perfectly captures Davis’ aesthetic.

- An installation in the CIA lobby of colorful, textile creations by Toledo-based alumna Loraine Lynn, that covers walls and ceilings with playful, amoebic shapes textured like shag rugs that want to be anywhere but on the floor.

- Amid the leafy park in the heart of University Circle, New York artist Asad Raza has installed “Orientation,’’ an abstract sculpture made of orange-pink plaster mixed with crushed zebra and quagga mussel shells dredged from Lake Erie. Inspired by the architecture of 18th-century astronomical observatories in Jantar Mantar, India, the sculpture also functions as a kind of playground slide. It’s a kid magnet that encourages conversations among adults as they watch children play. The work creates a sense of community that revolves around simple moments of joy.

- Diana Al-Hadid, a New York-based artist who grew up in North Canton and graduated from Kent State University in 2003, has created a towering sculpture surmounting the fountain in the Syrian Cultural Garden, one of the numerous sites in Rockefeller Park celebrating Cleveland’s immigrant nationalities. Al-Hadid’s sculpture is described in FRONT’s handbook as an effort that “speaks to growth and prosperity of immigrant communities,’’ but some viewers may see its broken and fragmented forms as a reference to breakdown and decay. The work tests a viewer’s perspective.

- Cooking Sections, a London-based collective, has installed a pair of aerating spray fountains in the basin east of the Great Lakes Science Center’s William G. Mather Steamship. The installation highlights the need to improve the health of Lake Erie, where algal blooms caused by agricultural and urban runoff create a vast dead zone with depleted oxygen every year. Dwarfed by the massive black hull of the ship, the fountains dramatize the need to address environmental problems that can seem vast and overwhelming.

- In the Rock Hall’s lower-level lobby New York artist Tony Cokes has installed a riveting video and sound installation documenting how pop music, especially heavy metal and hip-hop, has been blasted at deafening volumes in cells holding prisoners in the war against terrorism. It’s a harrowing display that raises profound questions about whether the U.S. military should be allowed to turn the art form celebrated by the Rock Hall into a means of psychological torture.

Clayton’s piece enables visitors to connect mobile phones to a circle of 40 audio speakers arranged in a semicircle in the center of the hall. An algorithm rearranges that audio files in ways that reveal haunting new possibilities among compositions.

Two sculptural installations in Brett Hall by O’Keeffe are part of a series including other works on view at the Akron Art Museum and the Transformer Station gallery in Ohio City that explore the artist’s response to his son Christian’s death by suicide in 2012.

Carlson is presenting “Cast a Shadow,’’ 2021, a visually compelling and technically stunning mural-sized drawing made in oil, acrylic, gouache, ink, colored pencil, and graphite, on 24 individual sheets of paper. The work’s frieze-like imagery centers on a vast body of water, perhaps one of the Great Lakes, punctuated by icebergs, rocky islands, and forms recalling lighthouse lenses, soaring birds, and totemic objects.

- Upstairs, on the library’s third floor, visitors can peruse archival materials related to Langston Hughes’ life as a literary giant who spent his formative high school years in Cleveland starting in 1916. The displays include a highly detailed photographic documentation of the family-owned lunch counters, barber shops, and groceries he would have encountered along Central Avenue on his walk to Central High School.

The display is a perfect accompaniment to this year’s FRONT, a reminder of Cleveland’s rich cultural history, and a deeply moving salute to the literary artist whose vision of rainbows inspired this year’s exhibition. 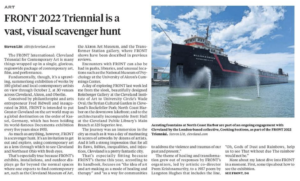