The essay and an accompanying exhibition he organized in Genoa championed the works of artists including Alighiero Boetti, Jannis Kounellis, Michelangelo Pistoletto, and Mario and Marissa Merz. They made art out of commonplace or “poor’' materials such as string, dirt, rags, stones, rope, tree branches, burlap, industrial junk, and “found objects’' of the sort celebrated by Marcel Duchamp.

The spirit of Arte Povera lives on again in the Akron Art Museum’s current main special exhibition, organized as part of the FRONT International: Cleveland Triennial for Contemporary Art.

The Akron installation, one of 30 Triennial exhibits on view across Northeast Ohio through Oct. 2, features the work of 18 artists, many of whom use humble materials typical of Arte Povera to create revelatory objects and images through techniques of accretion, assemblage, and collage.

“New Birth 1‚'’ a 1996 collage made by Dexter Davis of Cleveland depicts a compelling, totem-like figure made with torn scraps of paper adorned with imprints of his hands and explosive slashes of paint.

The late Judith Scott, a native of Cincinnati who died in California in 2005, is represented by constructions of tightly wound string suggesting mummified bodies suspended from the gallery ceiling or mounted on a wall.

“Muse,’’ a 2007 sculpture by New York artist Chakaia Booker made with slivers of discarded tires, dominates a corner of the gallery like a gigantic flower with fleshy and spiky black petals.

Hanging from a wall is “At a Depth Beyond Anyone,’’ a 2022 project by Trinidadian-American artist Allana Clarke, commissioned by the Akron museum and FRONT. It’s an enormous, rubbery, shiny-black blanket made of countless applications of quick-drying, hair-bonding glue. It cascades down a wall and spills onto the floor like a sensuous, smothering river of black lava.

FRONT’s main focus this year is exploring how artists find healing and solace from trauma and suffering through the daily practice of making art.

The Akron exhibit specifically explores art-making as a daily discipline that provides structure, meaning, and solace. Another idea behind the Akron show is that of craft, defined as a way of linking “the spiritual and the everyday.”

A clear example of the show’s theme of healing is a sculpture by Cleveland Heights artist Paul O’Keeffe that embodies his efforts over the past decade to cope with the death by suicide of his son, Christian.

The work consists of a long, hollow rectangular rail of deep blue Plexiglass incised with the words of a strangely ecstatic poem written by O’Keeffe’s son apparently in anticipation of allowing himself to be struck by a train.

The poem and the rail lead the eye inexorably to a tall, oval portal at one end of the sculpture, suggesting a gateway from one world to another. A single sock, a plaintive suggestion of a human body, dangles from a slender beam projecting from the structure.

The sculpture employs the refined aesthetics of Minimalism in a grieving father’s effort to comprehend the incomprehensible. The elegant materiality of the work differs, however, from a majority of the works on view that bring to mind the raw aesthetics of Arte Povera.

More typical of this vein in the Akron show are the elegant accumulations of the late Cleveland artist La Wilson, who specialized in organizing countless tiny objects in old-timey typographer’s trays or metal hardware bins.

Her bric-a-brac compositions suggest a compulsive desire for order balanced against explosive forces that threaten chaos. “Banded,’’ 1995, bundles hundreds of wooden pencils in a barrel-like arrangement of wood slats, belted together by bandoliers of firecrackers. “Burn Out,’’ a piece from 1980, is comprised of thousands of partially scorched wooden matches, sorted precisely by their length, and laid together like tiny pieces of cordwood in the boxlike compartments of a storage tray.

On a larger scale, a 2015 installation piece by Puerto Rican artist Daniel Lind-Ramos, entitled “Con-junto (The Ensemble),” evokes a magical gathering of musicians made of wood panels, burlap, machetes, swaths of fabric, palm tree trunks, dried coconuts, and assorted instruments, held together with pins, duct tape, and rope. As a label aptly indicates, the work brings to mind a Christian altarpiece, along with Pablo Picasso’s Cubist paintings of musicians.

Devan Shimoyama, an associate professor of art at Carnegie-Mellon University, conjures a desire to cope with racial violence in assemblages of silk flowers, beads, rhinestones, and fabric that resemble, one of which resembles a hoodie sweatshirt, and in another, a child’s swing hanging from the gallery ceiling on chains.

Both works resemble curbside shrines that often spring up at scenes of death in city neighborhoods. Shimoyama’s assemblages refer in particular to the deaths of Tamir Rice, fatally shot by police in 2014 at age 12 at a Cleveland playground; and Trayvon Martin, shot and killed by George Zimmerman, a neighborhood watch volunteer, in Florida in 2012.

The works of Shimoyama, Lind-Ramos, Wilson, and other artists in the show combine echoes of Arte Povera with new artistic agendas that range from efforts to envision the miraculous in everyday objects to denunciations of racism in American life.

One of the most powerful expressions of a new spin on the Arte Povera aesthetic is a series of three works by Cleveland sculptor Charmaine Spencer, who creates powerful abstract forms that respond in unique ways to the possibilities of her diverse materials.

“Fire,’’ also from 2021, uses paper, soil, black clay, glue, and nails, to create another large vessel whose charred-looking surfaces bristle with nails like an African fetish sculpture, into which nails are driven to destroy evil spirits, cure illnesses, or formalize contracts.

The rich textures and downward-sweeping shapes of the sculpture, created with the humblest of materials, communicate a sense of blessings raining down from heaven.

Germano Celant would be intrigued. 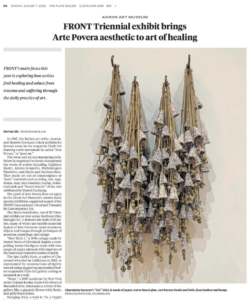