In his dream-like sequences of winding roads, cloudy mountains, and gleaming lakes, Sky Hopinka depicts his version of the American Dream. One of the most prolific Native American voices in experimental cinema, the Milwaukee-based artist filters urgent issues of displacement and belonging through his hallucinatory lens, elaborately blending nocturnal shots of Americana with introspection and activism. A selection of his recent films is currently on view at Cleveland’s Transformation Station, one of the venues hosting the FRONT International, which in its first iteration spans across Cleveland, Oberlin, and Akron. Hopinka and I perched on a bench in front of the art hub located in the city’s rapidly gentrifying Ohio City district to talk about visual narrative and the implications of showing his films in the Midwest. 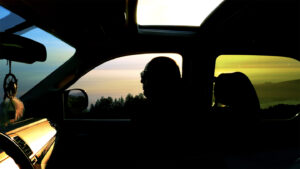