In the late 1990’s, Mr. and Mrs. Bidwell started collecting photography, their necessity corresponded to the deep love and passion they felt towards picture taking, as both practiced artistic activities during their leisure as hobbies. Later, after they realized their collection was growing bigger, they decided to exhibit it in a museum. Transformer Station opened its doors to the public in 2013 and has since then, shaped the cultural ecosystem in Cleveland, Ohio.

For those unaware of the reigning ecosystem in the city before Transformer Station’s arrival, it is of the utmost importance to say that Cleveland wasn’t exactly on the cultural radar. The metropolis is best known for its historic decline after the Second World War; by the end of the 1960’s, most of its industries had gone offshore contributing to the economical whirlwind that shook the entire “rust belt” region. Cleveland is an example of Renaissance in the United States; at the beginning of the century its industries were revitalized contributing to this rebirth. Mr. Bidwell’s museum transformed the area and triggered a major change in Cleveland’s landscape, the institution’s title almost foretold the boom that transfigured the neighborhood into a vibrating area that attracted real estate investors. The success of the experience led and encouraged the couple to create a larger venue for contemporary art lovers. The new initiative was baptised FRONT International and will be presenting its first edition in 2018. Front’s first edition, An American City, aspires to reproduce the same ambitious diagram citywide to develop and attract international tourism as well as to propel local creators to the international scene. Somehow, the project is symptomatic of an art phenomenon spreading all over the world where art acts as a revitaliser of local economies and communities. In addition to this, as Mr. Bidwell stated, Front emulates the scheme of European triennials, for the first time in the United States, a large scale cultural organization will be receiving avid spectators and art lovers alike in an entire community. Cleveland will thus be a laboratory, a magnifying glass viewing what is unfolding in the country. The force of the triennial will partially be owed to the current social and political issues that the United States are facing right now, the general public will be curious to see how this exhibition will stand in the future with present political events. Even though Cleveland is now a flourishing region it is in places like this, in the American Midwest and its vicinity, that hatred crimes and escalating xenophobia were incubated in the first place. Front International can act as a healer by reuniting public and private investment in a crucial historical moment.

The triennial, An American City, will be welcoming 50 artists to create new artworks that will be displayed in participating venues such as Akron Art Museum, Allen Memorial Art Museum at Oberlin College, Cleveland Institute of Art, the Sculpture Center, Transformer Station, Museum of Contemporary art in Cleveland and more. Front is undertaking the mission of reuniting public and private art institutions, an almost impossible operation anywhere else in the world. With a 5-million-dollar budget, Front International’s ambition is to create a citywide art experience where, according to Mr. Bidwell, most of the budget will be for educational purposes and will be given to artists to create new art. The project highly values research and artistic development, it doesn’t copy art fair programs but proposes a specific context for artists to forge new thinking. 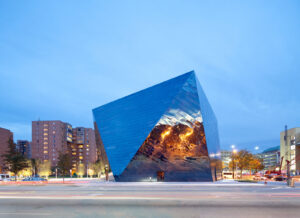