It’s been a long time coming but the FRONT International Triennial is finally here.

The event made its debut in 2018 at venues across northeast Ohio, featuring a host of internationally acclaimed artists, with the promise that it would return in 2021. Pandemic uncertainty threw that off schedule, but now it’s a go: launching on July 16 and running through October 2, the second edition of FRONT, called Oh, Gods of Dust and Rainbows, has finally arrived.

Art will be on view in five areas: downtown Cleveland, University Circle, Ohio City, Oberlin and Akron, at multiple venues in each, for a total of 30 venues and sites, showcasing work by 100 artists, mostly national and international with some Cleveland artists among them.

DJ Red-I hosts the afternoon which includes performances by Free Black, Sadhu Sounds, Hello!3D, Da Land Brass Band, Jakk Dance Collective, Mellow Man Funk, The Katy Band and FRONT artist Asad Raza, who will wrap things up at Old Stone Church on Public Square. Food trucks will be there, along with such organizations as Bike Cleveland, Splice Cream Truck, the LGBT Center, Lake Erie Ink, Sankofa Fine Arts Plus, CAN Triennial and more. Stop by and pick up their free magazine outlining everything there is to see and do in the next two-and-a-half months. Or go to their website for a full schedule.

Once again, Cleveland visual arts quarterly CAN Journal is presenting its second CAN Triennial, to supplement FRONT by showcasing local and regional artists. Called “You Are Here,” it launched July 8 and runs concurrently with FRONT through August 31 at more than a dozen venues in six Cleveland neighborhoods. You can get more info here.

The really good part is that virtually all the exhibits and installations are free, so you can plan a full summer of art without busting your budget. 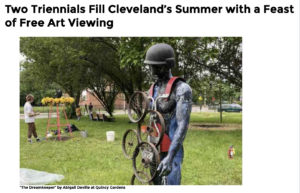